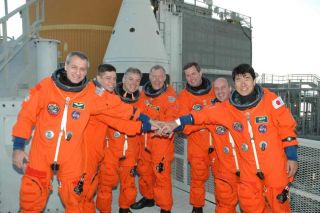 The shuttleEndeavour and a crew of seven astronauts will launch in less than two weeks on whatwill be the longest mission to date headed for the International Space Station(ISS), top NASA officials said Friday.

?The teamsare ready to go launch on March 11,? NASA space operations chief Bill Gerstenmaiertold reporters in a briefing at KSC. ?This is an extremely complex mission.?

Gorie andhis crewmates are charged with delivering the first module of Japan?s Kibolaboratory and a Canadian-built robot for exterior maintenance, as well as replacingone member of the station?s three-person crew. The astronauts will perform fivespacewalks to install the Japanese-built module, Canada?s two-armed Dextrerobot and test a shuttle heat shield repair technique among their other stationwork.

?This is reallythe international portion of the International Space Station,? said Gerstenmaier,adding that new control centers in Japan and France will join others in theU.S., Russia and Germany during the flight.

Leftoverdebris from the Feb. 20 destruction of a U.S. spy satellite, which prompteda launch delay for a new reconnaissance spacecraft this week, will nothinder Endeavour?s planned liftoff, mission managers said. The U.S. Navy destroyedthe dead satellite with a missile to prevent its half-ton load of toxicrocket fuel from endangering people on the Earth.

?It reallyposes no risk to the shuttle,? said Gerstenmaier, adding that the odds ofEndeavour suffering a major debris strike increased only slightly from a 1-in-269chance to 1-in-259. ?We don?t see any concern or problems.?

Endeavour?splanned March 11 launch comes less than three weeks after the successful returnof its sister ship Atlantis, which landed Feb. 20 after delivering Europe?sColumbus laboratory to the ISS.

Endeavouris set to launch between two other spacecraft also boundfor the ISS; the European-built unmanned cargo ship Jules Verne, to launchMarch 7, and a Russian Soyuz spacecraft to lift off on April 8.

NASA shuttlelaunch director Mike Leinbach said Endeavour has least two opportunities to fly,on March 11 and March 12, before standing down for five days to allow anunmanned Delta 2 rocket to launch a navigation satellite from the CapeCanaveral Air Force Station near KSC.

Endeavourmust also lift off by March 23 in order to complete its mission before theApril Soyuz launch to ferry a new crew to the ISS, Leinbach added.

If JulesVerne, the European Space Agency?s first Automated Transfer Vehicle, launchesMarch 7, there will likely be intermittent communication outages with Endeavourdue to the finite satellite resources available for use by the cargo ship,shuttle and space station, Shannon said.

While the shuttleis docked at the ISS, Jules Verne will be parked about 1,243 miles (2,000 km) awayfrom the station before continuing its shakedown cruise, mission managersadded.

Endeavour?screw is scheduled to head toward NASA?s KSC spaceport on March 7 to begincountdown procedures for their March 11 launch.