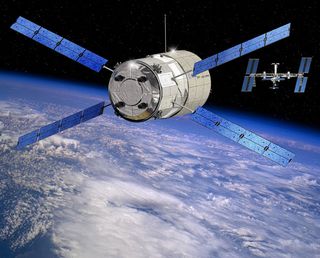 WASHINGTON— The maiden flight of an unmanned European cargo ship is just one of several oftightly-packed arrivals and departures coming up for the International SpaceStation (ISS).

TheEuropean Space Agency?s (ESA) first AutomatedTransfer Vehicle (ATV) is set to launch toward the space station as earlyas Feb. 22 between a pair of U.S. shuttle missions hauling new modules to the orbitallaboratory.

?We?ve beendeveloping this vehicle for more than 12 years now and we?re within touchingdistance of getting it on orbit,? said Alan Thirkettle, the ESA?s stationprogram manager, in a Thursday briefing. ?We?re very excited.?

But before thenew spacecraft lifts off, astronauts aboard the space station must cast off aspent Russian cargo ship on Feb. 4, then welcome fresh one on Feb. 7 — the sameday NASA?sshuttle Atlantis is due to haul the ESA?s Columbus lab toward the ISS.

The ATV, christenedJules Verne, has a narrow window to dock at the ISS between Atlantis? 11-day missionand the planned March flight of the shuttle Endeavour to deliver the firstsegment of Japan?s Kibo laboratory.

?Thingsreally start to stack up,? said NASA?s station program manager Mike Suffredini,adding that another Russian spacecraft and a shuttle hauling the centerpiece ofKibo are also due at the outpost in April. ?In fact, we?ve been talking to thecrews about being some sort of air traffic controllers; we?re just going tohave so many vehicles on or around ISS.?

Suffredinisaid that if the ESA?s Jules Verne ATV performs flawlessly during its two-weekshakedown, NASA may delay Endeavour?s planned March 11 launch to allow thecargo ship to dock at the ISS on March 15.

?The key toour success is going to be flexibility amongst all the spacecraft that arecoming to the ISS,? he added.

The JulesVerne ATV is the first of five ESA cargo ships built to launchfresh supplies to the ISS as payment for European experiments, hardware andastronaut slots on future crews.

?Five flightsin total will cover us in our obligations out until 2015,? Thirkettle said.

The 1.3billion-euro ($1.9-billion) ATV is a 20-ton spacecraft capable of hauling amaximum of 7.5 tons of cargo — three times that of Russian supply ships — to theISS inside its cylindrical shell.

?We?regoing to be the largest carrier of cargo to the International Space Station,? saidJohn Ellwood, ATV project manager.

The firstATV mission will launch atop an Ariane 5 rocket from Europe?s spaceport inKourou, French Guiana. It is expected to run about 15 days, which includes the10-day flight to the station and a series of demonstration days to test itsautonomous docking and collision avoidance systems.

The spacecraftuses an optical rendezvous system that relies on lasers to guide its approachand docking. Astronauts aboard the station won?t be able to take remote control,as they can with Russian spacecraft, but could press a red button that would back Jules Verne away should it stray off-course.

If all goeswell, the cargo ship could dock as early as March 15, or else take up a holdingpattern and rendezvous at the ISS after the Endeavour shuttle flight, ESAofficials said.