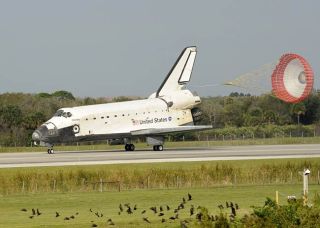 CAPECANAVERAL, Fla. - With the successful Wednesday landing of NASA?s shuttleAtlantis, the stage is set for a busy year of construction at the InternationalSpace Station (ISS).

Theseven-astronaut crew of Atlantis delivered the European-built Columbuslaboratory to the ISS in the first of up to six shuttle flights - the most in a single year since2001 - to continue station assembly and overhaul theHubble Space Telescope.

?I can?tthink of a better way to start this year out than this wonderful flight we justhad,? said William Gerstenmaier, NASA?s space operations chief, after Atlantistouched down at 9:07 a.m. EST (1407 GMT) here at the agency?sKennedy Space Center (KSC).

Commandedby veteran shuttle flyer Stephen Frick, Atlantis? STS-122crew installed and activated the 23-foot (7-meter) long Columbus laboratoryfor the European Space Agency (ESA). The astronauts also performed maintenance workand swapped out one member of the station?s Expedition 16 crew. But even beforeAtlantis returned to Earth, its sister ship Endeavour rolled out to the launchpad for a planned March 11 liftoff to haul a Japanese module and two-armedCanadian robot to the ISS.

?It feelsreally good to be having missions back-to-back like this again,? NASA launchdirector Mike Leinbach said.

Endeavour?sSTS-123 mission will deliver the first segment of Japan?s three-part Kibolaboratory to the ISS along with the Canadian Space Agency?s Dextre attachmentfor the station?s robotic arm. NASA pushed a third flight, initially slated tofly April 24 aboard Discovery, to May 25 due to delays in the preparation ofits external fuel tank, but the move is not expected to impact the agency?sshuttle lineup.

?We?re justgoing to work these flights one at a time,? Gerstenmaier said. ?We?ve got goodplans in place. We?ll see how things work.?

In additionto the next three shuttle missions, NASA plans to launch an August flight toHubble and two other flights, slated for October and December, respectively, torotate crewmembers, haul cargo and deliver new solar arrays at the ISS.

?It?s justgoing to be a joy to get through this year with five more launches,? saidLeinbach, adding that there will be little time for complacency among hislaunch teams.

NASA?sinternational partners also have a busy few months ahead. ESA officials plan tolaunch Jules Verne, the first AutomatedTransfer Vehicle cargo ship, to the ISS on March 7 while Russia is set tolaunch a new station crew to the orbiting laboratory on April 8. Discovery hasuntil about March 23 to launch in between those two flights, mission managerssaid.

Gerstenmaiersaid the U.S. military?s plan to shootdown a failing spy satellite laden with a half-ton of toxic rocket fuel shouldnot pose a debris risk to the Endeavour?s March launch, which is now less than threeweeks away. The U.S. Navy was waiting until Atlantis landed before going aheadwith a missile launch to knock down the bus-sized reconnaissance satellitelater this week.

?We don?tthink it?ll be a problem, but we?ll continue to analyze it to make sure that it?snot a problem or a concern to us,? Gerstenmaier said.

Leinbach saidAtlantis and its astronaut crew are in fine shape after their landing earliertoday. In addition to delivering the station?s new Columbus lab, Atlantis astronautsreturned U.S. spaceflyer Dan Tani to Earth to end his four-month stint as anISS Expedition 16 flight engineer.

?He?s doinggreat,? Gerstenmaier said, adding that, like all long-duration astronauts, Taniwill spend the next few weeks recovering from months of living without gravity.?He?s in great shape.?

ESAastronaut Leopold Eyharts of France relieved Tani and will stay aboard thestation until his own replacement arrives next month. Atlantis? STS-122 missionmarked NASA?s 121st shuttle flight and the eighth to fly since the 2003Columbia accident.