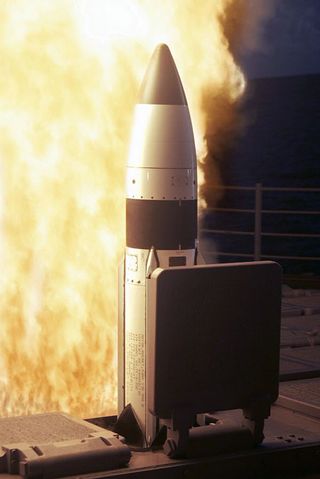 The loomingU.S. Navy attempt to shoot down a dying satellite could demonstrate ananti-satellite capability for its missile defense system.

Asuccessful kill would mark the first time the United States uses a tactical missile to destroy a spacecraft — assumingthat the ship-based missile defense system can handle the high closing speed ofmore than 22,000 mph.

"Everythingbecomes much more stressful at these large closing speeds," said Geoffrey Forden,MIT physicist and space expert. "But if they do hit it, that'd be veryimpressive, and that'd be proof that it has ASAT [anti-satellite]capability."

The Navy looksto rely on its Aegis Ballistic Missile Defense System based on U.S. cruisers and destroyers, which was developed toprotect U.S. forces and allies against short-and medium-range ballistic missiles. The interceptors rely on kinetic energyfrom their combined mass and speed to smash into their targets.

Three navalships stand ready in the North Pacific Ocean to each take ashot with a modified Standard Missile-3 (SM-3). If the first attemptmisses, the other two ships can take turns as backups.

Themodified SM-3 interceptors will supposedly be able to identify the falling U.S. spy satellite based on changes in their targetingsoftware. However, Forden expressed caution as to whether the Aegis system canscore a successful satellite kill at such high closing speeds — previous testsinvolved much slower-moving targets.

The United States has managed to take out satelliteswith other weapon systems in the past. An F-15Eagle fired a missile-launched kill vehicle that struck and destroyed atarget satellite in 1985. SPACE.com's Leonard David also noted a 1986 "StarWars" test by the Strategic Defense Initiative Organization involvingthe first space-to-space intercept of a target.

The United States is not alone in its anti-satellitetests. China used a missile to shoot down anold weather satellite a year ago, leaving a cloud of debris that willpresent a low-risk threat to other satellites and space missions for up to 20years.

A U.S. intercept of its falling spy satellite would happenlow enough to avoid debris endangering the International Space Station, andwould only occur after space shuttle Atlantis has safely landed.

"Allalong, other countries have said missile defense has offensive capabilities,and in fact is better suited for such," noted Joan Johnson-Freese, Naval War College security expert, in an e-mail toSPACE.com. "While the U.S. hasignored/downplayed those concerns, this test will basically prove that thoseconcerns were valid."

YetJohnson-Freese also observed that the U.S. Navy's three potential attempts"equates to lots of target practice — without internationalcondemnation," because the U.S.has declared the falling satellite a threat to public safety. That still hasnot prevented China and Russia from expressingtheir concerns.

Fordenpointed out that the U.S. interception attempt could alsohelp legitimize the earlier Chinese anti-satellite test which was heavilycriticized by the U.S. and other countries. Setting aprecedent now could open the door for future anti-satellite tests by othercountries, added Johnson-Freese.

A slight chancealso exists that China might be tempted to test its provenanti-satellite capability again, should the U.S.attempts fail to destroy the falling satellite.

"China has said it would take preventivemeasures, and that's the only thing that makes sense," Forden said.