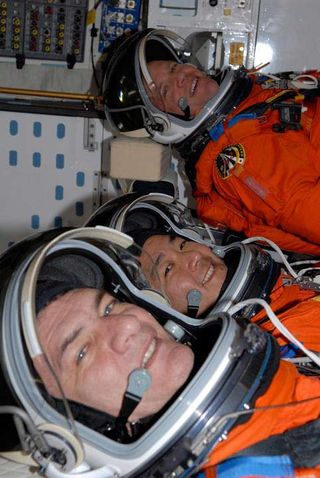 CAPECANAVERAL, Fla. - Two veteran NASA spaceflyers and a European astronaut areready to do their part to prime the International Space Station (ISS) forexpansion once their shuttle Discovery launches into orbit this week.

?The spacestation was meant international,? Wilson said in a NASA interview, adding thatthe Harmony module will anchor new laboratories from NASA?s ISS partners. ?Soit?s wonderful to be expanding the science opportunity by adding, in futureflights, the Japanese and the European laboratory modules.?

Hailingfrom Pittsfield, Mass., Wilson is making her second shuttle flight in two yearswith Discovery?s upcoming liftoff and will oversee the tricky robotics work toinspect the shuttle?s heat shield for damage, install the Harmony node andrelocate the station?s older Port 6 solar array segment to its permanentposition on the outpost?s port side.

She firstflew as a robotic arm operator during the NASA?sSTS-121 mission in July 2006, and hopes to use that experience to aid herfellow crewmates who will control the shuttle and ISS robotic arms for thefirst time.

?So Iactually feel that my biggest role is to help assist them become experiencedrobotic arm operators, and to help make sure that they get the training thatthey need,? Wilson, 41, said in a preflight interview.

Wilson joined NASA long before she begantraining as an astronaut in 1996. An aerospace engineer, she joined NASA?s JetPropulsion Laboratory in 1992 and supported the Galileo mission to exploreJupiter before applying twice to the agency?s spaceflying ranks.

DuringSTS-120, Wilson will also serve as flight engineer to assist Melroy and shuttlepilot George Zamka during launch and landing. But it is the relocation of the17.5-ton Port 6 truss, which has sat in its mast-like perch above the station?sUnity module for almost seven years, which she finds most challenging.

Moving thehefty solar power tower requires coordination between the station and shuttle roboticarms to pluck the segment free, install it at the leftmost edge of the outpost?sbackbone-like main truss and then finally unfurl its wing-like arrays.

?That is avery complex activity,? Wilson said. ?We hope it will go smoothly, but perhaps itwill go differently.?

From Italy, with pride

?It was aseed that, I would say, started when I was a little kid and I was seeing theseimages coming from the moon, with the astronaut bouncing around,? said Nespoli,50, who represents both the Italian and European Space Agencies (ESA). ?Ithought, ?Wow, that?s what I?d really like to do when I grow up.??

A formerSpecial Forces operator in the Italian Army, Nespoli is a native of VeranoBrianza, Milan and served as an astronaut training engineer for the European Astronaut Center in Cologne, Germany, before joining the spaceflying ranks of Italy and the ESA in 1998.

DuringSTS-120, he will serve as aspacewalking quarterback of sorts to help choreograph his crewmates workingoutside the ISS during four of the mission?s five planned excursions dedicatedto space station construction. The mission holds a special place in his heartbecause the Harmony module was built in Italy, and he has his own Esperiascience mission to perform for ESA researchers.

?It's a bigdeal [in Italy] because it's not everyday that you get to design, build andcarry in space a major piece of the space station,? Nespoli said of the Harmonynode.

?Paulo isone of the most creative engineers I?ve ever seen,? said Melroy, adding thatshe once watched as he carefully chose which tools to bring in space aboard Discovery.?I encouraged him to take one of everything because I am sure he?s going tobuild something in space with it.?

With one shuttleflight under his belt, Tani is the only member of Discovery?s crew who doesn?tplan to return home right away from the ISS. Instead, he expects to replaceNASA astronaut Clayton Anderson as part of the station?s Expedition 16 crew andspend several months living aboard the orbital laboratory.

But the46-year-old native of Lombard, Illinois did not initially believe life asan astronaut was a possibility during his youth.

?It?s adream job; it?s like we?re playing in the World Series or being a movie star,? Tanisaid in a NASA interview.

But afterobtaining bachelor?s and masters degrees in mechanical engineering from the MassachusettsInstitute of Technology and working alongside NASA astronauts in aerospace industry,the job seemed more attainable and he joined the agency?s spaceflying corps in1996.

He first flewto the space station in 2001 during NASA?s 12-day STS-108 mission and willperform one spacewalk and some robotics operations while Discovery is docked atthe orbital laboratory. But unlike his last flight, Tani has the extrachallenging of preparing to leave his wife Jane and two young daughters, ages 3years and about 17 months, respectively, for a lengthy spaceflight.

?I considerthe training the hard part,? Tani told reporters, adding that it entailed yearspacked with long-distance travel between Russian and the U.S. ?I feel like I'mpast the hump of the sacrifice, of the difficulty, and I think my family feelsthe same way now that we've made it through training.?

?It's thecoolest thing to do in the world, in my mind,? he said of his upcomingspaceflight. ?So I'm pleased to be able to do it.?