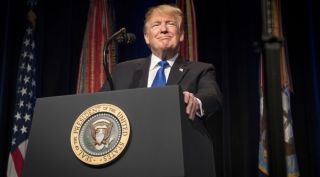 WASHINGTON — President Donald Trump and Vice President Mike Pence visited the Pentagon on Thursday to roll out the 2019 Missile Defense Review. In a speech to a packed auditorium, the president touted his record as commander in chief, congratulated Acting Defense Secretary Patrick Shanahan for his job performance, blasted NATO allies for not paying enough for their own security, and jabbed at Democrats for not agreeing to fund a border wall to end the nearly month-old partial government shutdown.

In brief comments on the Missile Defense Review, he mentioned the importance of space as a domain of war and assured the Pentagon that its budget for fiscal year 2020 will request funding for new missile-tracking satellites to defend the United States and allies.

Trump also seized the opportunity to commend the Pentagon's ongoing work to organize a new military branch for space. The nation will have advanced missile defense capabilities, he said, "with the Space Force leading the way." Space ultimately is "going to be a very big part of our defense and offense," Trump said. He insisted that space-based missile defense will be funded in 2020 and noted that the Pentagon will "remove bureaucratic obstacles" to accelerate the acquisition of these systems. [Military Space: The Latest Satellites and Missions]

In the Missile Defense Review, DoD highlights partnerships that the United States has forged with allies to counter missile threats. But Trump struck an adversarial tone by calling for "fair burden sharing" and for allies to pay for a portion of the cost of missile defense. "We are protecting very, very wealthy countries," he said.

In remarks at the Pentagon auditorium, Shanahan said the United States for the first time recognizes the threat of "new and sophisticated missiles." Examples are hypersonic and advanced cruise missiles that countries like China and Russia are developing as tools of "political intimidation" and to deter the U.S. military from intervening in future military conflicts when these weapons might be deployed.

Speaking to reporters later at a Pentagon news conference, John Rood, undersecretary of defense for policy, called the MDR "the start of a new era, the next era, in missile defense." The United States since the 1990s has had a missile shield — a network of ground, air and sea based radars and interceptors — in place to protect the nation from ballistic missiles from countries like North Korea and Iran. DoD will be expanding the coverage to hypersonic and cruise missiles, said Rood. "Over the last two decades , we have seen an evolution of the missile threat, and more sophisticated capabilities."

Mike Griffin, undersecretary of defense for research and engineering, said the Russians and Chinese are developing hypersonic tactical missiles for regional deployment. Even though they are non-nuclear, they have a "strategic impact," he said, because they are used to keep U.S. forces on the defensive.

Missile defense analyst Tom Karako, of the Center for Strategic and International Studies, said most of what is discussed in the 2019 review are continuations of existing efforts. For the first time, however, the document puts Russia and China "in the same sentence as missile defenses." Another subtle change is that it acknowledges that a path to peace with North Korea may theoretically be possible, but nevertheless the review "endorses a defense and defeat dominant posture toward rogue states," Karako said. The single most significant action in the MDR is the endorsement of a program to build a new network of early warning and tracking satellites, which the Pentagon calls a Space Sensor Layer.

The Pentagon has missile warning satellites — the Space Based Infrared System — in high and geostationary Earth orbits to detect launches such as intercontinental ballistic missiles. The future space-based sensors the Pentagon plans to develop will be in lower orbits, designed to monitor, detect and track more advanced, maneuvering hypersonic glide vehicles from locations almost anywhere on the globe. Space sensors "enjoy a measure of flexibility of movement that is unimpeded by the constraints that geographic limitations impose on terrestrial sensors, and can provide 'birth to death' tracking that is extremely advantageous," the review said.

More sensors in space "may increase the overall likelihood of successfully intercepting offensive missiles, reduce the number of U.S. defensive interceptors required to do so, and potentially destroy offensive missiles over the attacker's territory rather than the targeted state," said the report.

Congress in the National Defense Authorization Act for 2019 directed DoD to identify the most promising technologies, estimate a schedule, cost and personnel requirements for a space-based defensive layer.

Griffin noted that the Space Sensor Layer will serve as a targeting tool in wartime and as a "persistent, timely" surveillance capability in peacetime. [Launch Photos: Delta IV Launches WGS-9 Military Communications Satellite]

How long will this take?

Griffin said it could take a few years to develop the Space Sensor Layer. "We're not talking about going straight from the missile defense review to an objective system," he told reporters. "You'll start to see experiments materialize over the next few years," he said. "We want to see some action."

The Missile Defense Agency has been studying concepts for a Space Sensor Layer to defend from hypersonic threats for at least three years. It concluded that because hypersonic weapons are "dimmer" targets that are more difficult to see, the sensors need to be closer to the action. "We also have to have a much broader range of coverage," Griffin said. "So the best approach is a network of satellites in low orbit. How many and on what orbits remains to be decided."

The George W. Bush administration tried to develop a constellation of satellites in lower orbit, the Space Tracking and Surveillance System to keep tabs on enemy missiles from launch to intercept. The goal was to deploy 24 satellites but only two were launched and the program was terminated by the Obama administration in 2013.

Air Force Lt. Gen. Sam Greaves, director of the Missile Defense Agency, said a lot of analysis is going into the Space Sensor Layer to avoid a repeat of past failures. MDA will be "executing a disciplined acquisition process" for these new capabilities, said Greaves. "We have to prove things in the laboratory, prove things on the ground" before the Pentagon commits to buying any system. "You won't see us jumping to an objective system," he said. "Milestone driven is a key term, it will be data rich decision making."

But Griffin suggested that he will push for the program to get underway as soon as possible. "We're starting this year," he said. Congress has not set specific cost limits for the Space Sensor Layer but Griffin said he is not concerned about it becoming outlandishly expensive. "I believe it will be affordable," he said. "It will be comparable to other existing assets we have today, but I can't give you a number right now."

Not happening any time soon: space-based interceptors. "We'll be initiating yet another study," said Griffin. Missiles in space have long been talked about but there are still many unknowns. He said DoD needs to better understand their effectiveness, cost and "other considerations."

Roman Schweizer, defense industry analyst at Cowen Research, said the missile defense review contains "strong statements about international threats and demands for new technologies" but funding and acquisition plans will remain unclear at least until the fiscal year 2020 budget is made public and Congress begins to analyze the request.

Follow-on actions from the review could benefit companies like Boeing, Lockheed Martin, Northrop Grumman Innovation Systems, Raytheon and Aerojet Rocketdyne, Schweizer wrote in an email to investors. "We anticipate a robust discussion in Congress once the 2020 budget is released."

This document is an "important step in making the case for new missile defense spending, but Congress will have a lot to say. "And remember one important wrinkle, none of this is final until Congress passes the 2020 budget (and future budgets) and we would expect House Democrats to pick apart the review and question some of more controversial aspects such as the militarization of space."