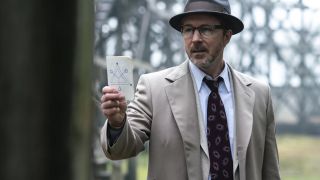 Unidentified flying objects (UFOs) have long inspired curiosity and speculation, but when did our fascination with UFOs really take off? A new television drama explores the origins of the UFO phenomenon, drawing from the incredible true story of the U.S. government’s decades-long investigation of reported UFO encounters.

The secret program — dubbed Project Blue Book — launched in 1952 and was monitored by the U.S. Air Force until the project's termination in 1969. During that time, experts investigated more than 12,000 reports of UFO sightings, of which over 700 remain unexplained, according to records in the National Archives.

Now declassified, the most intriguing of these unsolved cases are revisited in the History Channel series "Project Blue Book." Premiering tonight (Jan. 8) at 10 p.m. ET/9 p.m. CT., the show offers UFO aficionados and skeptics alike a peek at how it all began. [7 Things Most Often Mistaken for UFOs]

Aidan Gillen (Littlefinger on HBO's "Game of Thrones") stars as Dr. J. Allen Hynek, the real-life professor and astrophysicist who acted as the science adviser for Project Blue Book, and who is known to many as the "father of UFOlogy," show creator and executive producer David O'Leary told Live Science.

In the series, Hynek joins Air Force officials to investigate and explain sightings of peculiar lights in the sky, mysterious glowing fireballs, "flying saucers" and even purported extraterrestrials, History Channel representatives said in a statement.

"The government had to respond to the fact that military pilots, commercial airline pilots, police officers — people with trained eyes — were seeing objects in the sky that they couldn't understand," O'Leary said.

But as "Project Blue Book" unfolds, Hynek comes to an unpleasant realization: His scientific curiosity about UFOs may run counter to a government agenda that wants to bury events that prove unthreatening, but nonetheless truly defy explanation, O'Leary said.

During the period in U.S. history that gave rise to Project Blue Book, global superpowers were testing the boundaries of military technology, the likes of which had never been seen before. For obvious reasons, the U.S. Air Force wanted to keep tabs on all UFO sightings — which could represent previously unknown weapons — in the interests of national security, according to O'Leary.

However, hundreds of the UFO sightings investigated by Project Blue Book proved impossible to explain at all.

An incident that took place Sept. 12, 1952 (and is featured in the series), involved three boys in Flatwoods, West Virginia, who witnessed a fiery red light streaking overhead, followed by a loud crash. A local newspaper reported at the time that when the boys approached the scene, they glimpsed "a 10-foot monster with a blood-red body and a green face that seemed to glow," later dubbed "The Flatwoods Monster," the History Channel recounted.

Another unexplained sighting was documented in Lubbock, Texas, on Aug. 30, 1951; a teenager photographed a V-shaped arrangement of lights in the sky, now known as the Lubbock Lights, according to the History Channel.

Other unnerving encounters with UFOs were directly observed midair by pilots, who are trained to recognize unexpected sights that may appear during challenging flight conditions. This makes their descriptions of UFOs harder to dismiss as delusional, and fueled Hynek's efforts to get to the bottom of these baffling events, O'Leary explained.

Case reports dramatized by the show feature a range of witnesses, from lone civilians, to individuals representing the military and law enforcement, to groups of people all reporting the same sighting, executive producer and showrunner Sean Jablonski told Live Science.

"By the time you get to the finale, there's a mass sighting by credible witnesses that actually prompts the president to get involved. So you go, 'Well, that's just undeniable.' And it's historically accurate," Jablonski said.

Though the real Project Blue Book ended decades ago, interest in UFOs has scarcely dimmed. In fact, the U.S. government has continued to monitor and analyze UFO reports to this day, Live Science reported in 2018. The work took place under a secret program called the Advanced Aviation Threat Identification Program (AATIP), and it spanned decades despite official statements that federal UFO investigations ended with the demise of Project Blue Book in 1969.

"UFOs are a mystery that's still unsolved at this point," Jablonski said. "Once you open your mind up to the idea of the UFO phenomenon, then you have to ask 'Who's flying them?' And then you have to talk about alien life. It unmoors you from a reality that most people live in their whole lives."