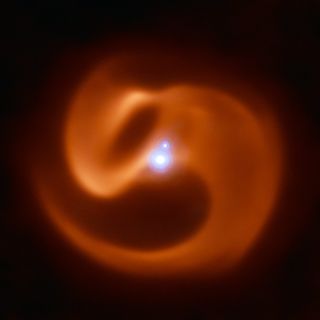 Apep's stellar streams coil around the knot of orbiting stars at its core in this image from the European Organisation for Astronomical Research in the Southern Hemisphere's Very Large Telescope.
(Image: © ESO/Callingham et al.)

For the first time, astronomers have found a star system in our galaxy that could produce a gamma-ray burst — one of the brightest and most energetic events known to occur in the universe.

The star system is officially called 2XMM J160050.7–514245, but the researchers nicknamed it "Apep" after the Egyptian snake-deity of chaos. The name works nicely for the system, which is surrounded by long, fiery pinwheels of matter cast out into space, as shown in the above image from the Very Large Telescope.

Those pinwheels come from a pair of tightly orbiting binary "Wolf-Rayet" stars at the system's center. (They're close enough to one another that they look like a single bright light below the system's third, dimmer and more distantly orbiting star, also shown in the image.)

Wolf-Rayet stars are ultramassive suns that have reached the ends of their lives and burned up all their hydrogen. They thus fuse heavier elements, spinning rapidly and tossing material into space. They're bright enough that astronomers can detect their presence even when they reside in other galaxies. And when their cores collapse, triggering supernovas, astronomers believe they may create the long gamma-ray bursts sometimes detected incoming from deep space, the researchers said.

In a paper set to be published today (Nov. 19) in the journal Nature Astronomy, researchers report that Apep is a good candidate for such a burst, making it the first star system of its kind discovered in the Milky Way.

Those long pinwheels, the researchers wrote, result from stellar winds moving away from the binary system at about 2,100 miles per second (3,400 km/s).

The Wolf-Rayet stars must be rotating extraordinarily fast to fling off all that matter — nearly fast enough to tear themselves apart, the study said. It's unclear precisely what causes stars of this kind to spin so fast, but that speed will play a key role in producing a gamma-ray burst when the supernova eventually comes, the researchers said.

And that time should come soon, in cosmic terms. Wolf-Rayet stars live in this fast-spinning state for just a few hundred thousand years. Only a few of them have the necessary properties to produce gamma-ray bursts, though, which is likely a big part of why the bursts are so rare.