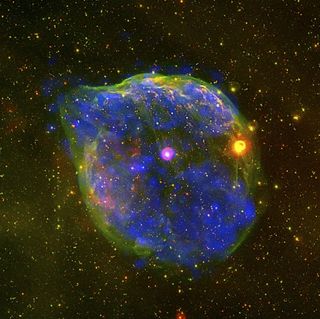 Paul Sutter is an astrophysicist at The Ohio State University and the chief scientist at COSI Science Center. Sutter is also host of the podcasts Ask a Spaceman and RealSpace, and the YouTube series Space In Your Face.

Such was the case when Charles Wolf and Georges Rayet happened upon a strange star one night at the Paris Observatory in 1867. I don't know what they said to each other after the discovery — even if I could overhear them, my French is a little too rusty — but it probably wasn't, "Sweet! Our names get to be featured in a skipped-over chapter of every astronomy textbook of the future!"

You just have that glow

What cemented their place in trivia lore was the peculiar properties of the light coming from that star they observed. Until then, nobody had seen anything quite like it. And by "it," I mean emission spectral lines.

OK, I admit it, that sentence probably doesn't sound very impressive. Let's dig ourselves out of the jargon. If you have something hot — a light bulb, say, or maybe a star — it will glow. The light it gives off is a mixture of all sorts of wavelengths. If it's the right temperature, the wavelengths will be an even mixture of reds, greens and blues, which our brains correctly interpret as "white." If the object is a little hotter, its light might be a mixture of ultraviolets and blues, without any of the cooler red wavelengths. Once again, our brains identify its color, this time as a "blue" thing.

You, too, are glowing, and not in the way people like to compliment each other. All the atoms and molecules on the surface of your body are a hoppin', and a jigglin', and a dancin'. They give off all sorts of wavelengths of light, but mostly in the infrared part of the spectrum. Slap on some infrared goggles, and people light up like a candle.

Stars are made of stuff that's wiggling about like crazy, too, and sure enough, they glow. So when we look in detail at the mixture of light coming from a star, we see all sorts of wavelengths.

Usually, though, there are some wavelengths missing. This is because the outer layers of a star's atmosphere have a bunch of atomic junk in them, and those atoms can filter out very specific wavelengths of light. They do this by sucking up those light photons, allowing them to jump to a higher quantum mechanical state, and giving off the energy some other way, usually through vibrations.

But when Wolf and Rayet looked through their télescope, they instead found extra light at specific wavelengths, not subtracted light. Mon dieu!

It took a while to figure out what was going on, and to be perfectly honest, astronomers still aren't exactly sure what's causing it.

One of the problems is that Wolf-Rayet stars are rare. Just a paltry few hundred in our Milky Way, compared to the hundreds of billions of every other kind of star. So we don't exactly have a lot of data to go on.

Wolf-Rayet stars are so rare because they're massive, meaning a) there's just fewer of them to start with, because it's hard to get big balls of gas in the first place, and b) massive stars don't live long, so if we take a snapshot of the universe, we're more likely to see the smaller, long-lived stellar denizens than their big-boned cousins.

That massiveness is a clue to their peculiar light pattern. They appear to be a normal stage in the evolution of a giant star, after the initial hydrogen burn run in the core, and just before the inevitable fireworks show of a supernova — they're waiting in the galactic green room, just about to burst onto the stage in a grand finale performance.

And in that warm-up phase, the star throws some serious temper tantrums. Entire layers of the star will peel off like a plasma onion, violently thrown into the surrounding system. The inner regions of the star, naked and exposed to the vacuum of space for the first time, glow much more brightly and intensely than those outer layers. Spewing high-energy radiation, that blinding light impacts the thrown-off gas cloud.

This process is called fluorescence, and you might be more familiar with it in other settings. What do CFL bulbs, deep-sea jellyfish and Wolf-Rayet stars have in common?

Honestly, all of this is a guess. A good guess, but a guess nonetheless. Like I said, there aren't a lot of examples to observe, but we're making do with what we've got.

Since Wolf-Rayet stars appear to be a warm-up act to a big supernova, by studying them in more detail we can better understand the conditions, warning signs, and circumstances of the Big Blasts themselves. Every little bit helps (with thanks to old-timey French astronomers).

Read more columns from Paul on his Expert Voices article page and listening to the episode "Wolf-Rayet Stars: Sci-fi or what?" on the Ask A Spaceman podcast, available on iTunes and on the Web at http://www.askaspaceman.com. Thanks to @Size111 for the question that led to this piece! Ask your own question on Twitter using #AskASpaceman or by following Paul @PaulMattSutter and facebook.com/PaulMattSutter.