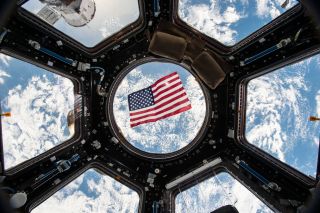 An American flag floats in weightlessness, with the Earth as a magnificent backdrop, in this photo from the Cupola observation room on the International Space Station taken by NASA astronaut Kjell Lindgren.
(Image: © NASA/Kjell Lindgren)

Even the International Space Station has a local polling site, thanks to a Texas law that arranges special absentee ballots for U.S. astronauts who are in orbit on Election Day.

In order to vote from space, astronauts request a special absentee ballot about six months in advance, according to NASA. On the big day, they file their ballot electronically through a protected system. The process has been in use since 1997, when a U.S. astronaut voted from aboard the Russian Space Station Mir, which preceded the International Space Station.

This Election Day, just one U.S. astronaut is aboard the space station, Serena Auñón-Chancellor. She did not respond to a request for comment through NASA's press office about whether she would be voting from space.

A second NASA astronaut expected to be voting from space this year but now isn't. Nick Hague, who was scheduled to fly to the station in October for a six-month stay, told Space.com through a NASA spokesperson that he had requested an absentee ballot in preparation for being off Earth on Election Day.

However, the Soyuz rocket that he boarded for the trip experienced a failure during launch on Oct. 11, sending him and his Russian colleague plummeting abruptly to Earth. After a safe landing, he was able to cancel the arrangement, he said, and he and his family participated in early voting on Oct. 27, he told NASA. (Texas allowed early voting between Oct. 22 and Nov. 2 this year.)