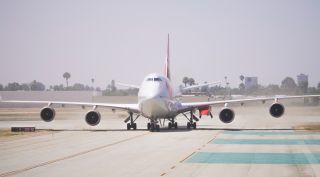 Virgin Orbit's Boeing 747, named "Cosmic Girl," is seen here with the pylon fitted to its left wing that LauncherOne rockets will attach to for the company's air-launch missions.
(Image: © Virgin Orbit)

WASHINGTON — The carrier aircraft for Virgin Orbit's LauncherOne system has performed a series of test flightsin preparation for upcoming flights with the rocket attached.

The flights of the company's Boeing 747 aircraft, nicknamed "Cosmic Girl," were the first since the company installed a pylon on the plane's left wing that will be used to carry the LauncherOne rocket on future flights of the air-launch system.

The company disclosed few details about the test flights, but flight tracking services such as Flightradar24 list three flights of the aircraft in recent days, most recently Aug. 27, taking off from the Southern California Logistics Airport in Victorville, California. The flights ranged in duration from one and a half to three and a half hours in airspace over the Mojave Desert and over the Pacific Ocean off the California coast. [Virgin Galactic's LauncherOne: An Air-Launched Rocket in Pictures]

The company installed the pylon about a month ago, attached to a point on the wing between the fuselage and the inner engine designed to ferry a fifth, non-operational engine. Those test flights went "extremely well," according to a company official, calling it a "big milestone" as the company.

In a commercial space panel discussion Aug. 1 at a meeting of the Air Line Pilots Association here, Todd Ericson, vice president of safety and flight test at sister company Virgin Galactic said a series of "envelope expansion" test flights of the 747 with the pylon was scheduled for the coming weeks. The company then plans to carry out a series of captive carry test flights with a model of the LauncherOne rocket, culminating in a test where the rocket is dropped.

If successful, those tests would clear the way for a first orbital launch attempt by LauncherOne "by the end of the year," Ericson said.