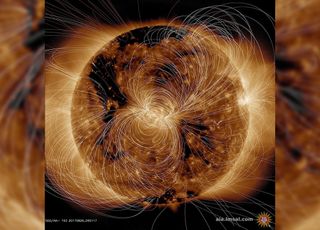 Don't be alarmed, but the sun is constantly exploding. While violent nuclear fusion reactions power the sun's 27-million-degree-Fahrenheit (15 million degrees Celsius) core, towers of molten plasma, crackling radiation and electromagnetic energy rise and fall from the star's blazing surface in a constant tangle of heat and light.

It's pretty cool — and almost completely invisible to human eyes. Thankfully, researchers at NASA's Solar Dynamics Observatory have used computer models to capture snapshots of this unseen solar energy every day. Yesterday (Aug. 16), they shared one of those snapshots, which you can see above. [Sun Storms: Incredible Photos of Solar Flares]

In the computer-enhanced ultraviolet photo, you can see a model of the sun's magnetic-field lines swirling out of the star's surface the way they appeared on Aug. 10, 2018. Each white line represents a powerful electromagnetic eruption resulting from high-energy interactions between the ultrahot, supercharged particles that make up both the sun's magnetic field and the plasma writhing around the star's surface.

As you can see from the image, some of those streams of energy blast far into space, creating solar winds and other space weather, while others rise from the sun's surface, spin around and fall back down again in closed loops. These returning loops of magnetic energy can further stir the pot of charged particles on the sun's surface, resulting in more and greater explosions of solar weather, including solar flares and big belches of radiation known as coronal mass ejections.

It may look like there's a lot going on, but historically speaking, the sun is actually experiencing a bit of a slow season right now. Scientists don't know exactly why, but the sun's magnetic field seems to follow a pretty reliable 11-year cycle of activity in which these loops of solar energy grow progressively larger and more complicated before resetting to a relatively stable state. Toward the end of each cycle, the sun radiates more, sunspots become more frequent, and powerful solar storms are more likely to blaze off of the sun's surface and deep into space.

Once the magnetic field reaches a point of maximum activity — or its solar maximum — the star's magnetic poles flip, and a new period of relative inactivity begins again. (This new beginning, as you might deduce, is called the "solar minimum.")

The last solar maximum occurred in April 2014 and, according to NASA, was pretty weak by the sun's historical standards. One of the largest solar storms on record, the so-called Carrington event, for example, occurred near a solar maximum in 1859. When the massive wave of solar energy slammed into Earth, telegraph wires shorted out and burst into flame, and a beautiful aurora — usually visible only from polar latitudes — shimmered in the sky as far south as Cuba and Hawaii. Fortunately, 2014 was much less eventful.