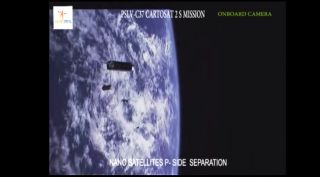 Indian PSLV rocket deploys a cluster of cubesats during a February 2017 mission. A new technology could make it easier to identify individual cubesats shortly after deployment.
(Image: © ISRO)

LOGAN, Utah — A technology using a tiny laser tracker could help resolve one of the major challenges involved with the launching of cubesats: identifying individual satellites after their deployment.

The concept, presented at the AIAA/Utah State University Conference on Small Satellites here Aug. 9, involves the use of a small, low-power laser on the exterior of a cubesat, transmitting a unique identification code that can be observed by small telescopes on the ground.

The concept was prompted in part by the difficulties satellite operators have identifying their cubesats when they're deployed in large groups, such an Indian PSLV launch in February 2017 that relased 104 small satellites, primarily cubesats. [Cubesats! Tiny Satellites Explained (Infographic)]

"Cubesats are being launched in larger and larger groups, and, for most cubesat operators, they have no way of telling which object is theirs immediately after launch," said Rebecca Holmes of Los Alamos National Laboratory. She noted there are other cases where it can be difficult to identify an individual cubesat, such as a lapse in tracking or an unexpected orbital change.

What's needed, she said, is something analogous to a license plate. "Just like cars have license plates and planes have tail numbers and ships have beacons, satellites need license plates that anyone can read," she said.

The solution developed at Los Alamos is called the Extremely Low Resource Optical Identifier (ELROI). "A simple blinking light can be seen from orbit if it's the right kind of light and we blink it in the right way and then we look at it with the right kind of detector," she said.

A laser transmits brief pulses of light that encodes the identification code, but keeps the system's average power at the milliwatt level. That signal can be detected on the ground with a 35-centimeter telescope equipped with a narrow spectral filter to block light at all frequencies other than that the laser transmits it. That enables what Holmes called "extreme background rejection," making it possible to make out the faint laser signal.

A prototype of the ELROI technology, called ELROI-PC104, will be flown as part of the NMTSat cubesat mission developed by the New Mexico Institute of Mining and Technology. That satellite is scheduled for launch in December on a Rocket Lab Electron rocket as part of a NASA Educational Launch of Nanosatellites mission.

Other prototypes are under development for future tests, Holmes said. The goal is to shrink the ELROI system to something roughly two by two centimeters, powered by its own solar cell.

"That could easily be stuck to the side of any cubesat," she said. "Even the smallest of satellites would be able to fly something like this."