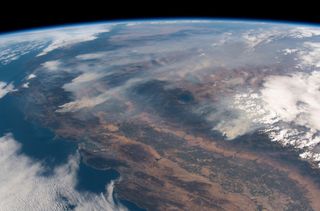 European Space Agency astronaut Alexander Gerst posted this view of the California wildfires, as seen from the International Space Station (ISS), on Twitter on Aug. 3, 2018.
(Image: © Alexander Gerst/ESA via Twitter)

The wildfires raging across California are a sight to behold from 250 miles (400 kilometers) above Earth.

Astronauts aboard the International Space Station (ISS) have taken dramatic new photos of the dangerous and destructive blazes, which are blackening huge swaths of the Golden State and throwing off smoke that billows far to the east.

"California burning. These fires are frightening to watch, even from space," European Space Agency (ESA) astronaut Alexander Gerst wrote via Twitter Friday (Aug. 3), where he posted images of several big fires and their even larger smoke plumes. "Here's a shout-out from space to all firefighters on this planet, my former colleagues. Stay safe, my friends!" [In Photos: The 2018 California Wildfires as Seen from Space]

A geophysicist and volcanologist, Gerst also worked as a volunteer firefighter while in school, according to his ESA biography.

NASA astronaut Ricky Arnold — a crewmember on the ISS' current Expedition 56 along with Gerst and four other spaceflyers — posted some fire photos of his own via Twitter today (Aug. 6).

"Plumes of billowing smoke from the #CaliforniaWildfires stretch eastwards [toward] the Rocky Mountains," Arnold tweeted.

Dozens of fires are currently burning across California. The biggest is the Mendocino Complex, which is now the second-largest wildfire in state history.

The Mendocino Complex consists of two neighboring Northern California blazes, the Ranch and River fires. The Ranch Fire has scorched 225,001 acres (91,055 hectares) to date and is just 21 percent contained, according to the California Department of Forestry and Fire Protection (Cal Fire). The River Fire has burned 48,663 acres (19,693 hectares) and is 58 percent contained.

The Mendocino Complex fire has not killed anyone so far. The same cannot be said of the Carr Fire, which is raging farther north, in Shasta County; it has claimed seven lives to date. The Carr Fire has burned 163,207 acres (66,048 hectares) as of this morning and is 45 percent contained, according to Cal Fire.

For the latest updates about all California's wildfires, go to Cal Fire's "Incidents" page.

ISS crewmembers aren't the only eyes tracking the fires from orbit. A variety of satellites are doing precision monitoring work, including NASA's Terra and Aqua craft.