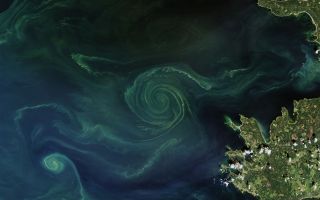 Phytoplankton and blue-green algae blooms in the North Atlantic Ocean and Arctic Ocean are particularly intense this year and are creating some spectacular and enormous green swirls in the water.
(Image: © NASA Earth Observatory)

In what looks like a work of art, neon-green algae appear to whirl in the Baltic Sea. The image was captured on July 18 by NASA's Operational Land Imager on the Landsat 8.

Algae blooms occur every summer off the coast of Scandinavia, but the events appear particularly intense this year, according to NASA's Earth Observatory.

The large swirl in the center of the image is about 20 kilometers (12.4 miles) across, and it was likely created by a bloom of cyanobacteria called blue-green algae, the Earth Observatory reported. Diatoms, a type of phytoplankton rich in chlorophyll (the green pigment found in plants and algae), may also be contributing to what look like green paint strokes decorating the surface of the water. The bloom here appears to trace the edges of a vortex created by an ocean eddy, which could be where nutrients are rising from deeper water, according to the Earth Observatory.

Though these enormous algae spirals are striking to look at, their presence is not necessarily a good sign for the environmental health of the region. Phytoplankton and cyanobacteria consume large amounts of nutrients and leave the water deprived of oxygen. Indeed, highly concentrated areas of algae create what are called dead zones, because fish and other marine creatures are unable to survive when the water becomes severely oxygen-depleted. [Ocean's 8: Satellite Snaps Stunning Photo of Bloom]

In the past few years, the Baltic Sea has experienced the lowest oxygen levels seen in the area in at least 1,500 years, according to research published earlier this month in the journal Biogeosciences. One of the primary causes of the oxygen decline is that human-caused pollution — primarily nutrient-dense fertilizers and sewage — has for decades spilled into the ocean from the Scandinavian countries, fueling oxygen-depleting algae blooms. Although efforts to curb pollution in the past few years have decreased levels of runoff, these measures haven't resulted in fewer algae blooms or smaller dead-zone perimeters. The scientists suspect that's because climate change is raising the water temperature, and warm water is less effective at holding oxygen.

Nearby, the entire Gulf of Finland is also experiencing record-high levels of cyanobacteria, levels that haven't occurred in at least the past decade, reported the Finnish Broadcasting Company, Yle. The current heat wave in the Northern hemisphere and high levels of phosphorus from pollution and dead organisms are the two key ingredients creating the perfect conditions for an abundance of blue-green algae in the area. Experts expect the bloom to continue through at least early August, Yle reported.