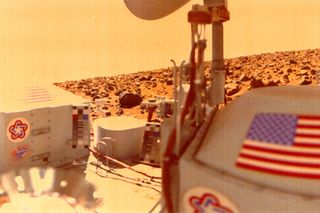 This view from the Viking 2 shows Utopia Planitia on Mars in 1976. Some researchers think that the Viking lander's main instrument may have burned up organic molecules in collected soil samples.
(Image: © NASA/JPL-Caltech )

Over 40 years ago, a NASA mission may have accidentally destroyed what would have been the first discovery of organic molecules on Mars, according to a report from New Scientist.

Recently, NASA caused quite a commotion when it announced that its Curiosity rover discovered organic molecules — which make up life as we know it — on Mars. This followed the first confirmation of organic molecules on Mars in 2014. But because small, carbon-rich meteorites so frequently pelt the Red Planet, scientists have suspected for decades that organics exist on Mars. But researchers were stunned in 1976, when NASA sent two Viking landers to Mars to search for organics for the first time and found absolutely none.

Scientists didn't know what to make of the Viking findings — how could there be no organics on Mars? "It was just completely unexpected and inconsistent with what we knew," Chris McKay, a planetary scientist at NASA's Ames Research Center, told New Scientist. [Viking 1: The Historic First Mars Landing in Pictures]

A possible explanation arose when NASA's Phoenix lander found perchlorate on Mars in 2008. This is a salt used to make fireworks on Earth; it becomes highly explosive under high temperatures. And while the surface of Mars isn't too warm, the main instrument aboard the Viking landers, the gas chromatograph-mass spectrometer (GCMS), had to heat the Martian soil samples to find organic molecules. And because perchlorate is in the soil, the instrument would have burned up any organics in the samples during this process.

The discovery of perchlorate reignited scientists' convictions that the Viking landers could have found organics on Mars. "You get some new insight, and you realize that everything you thought was wrong," McKay said.

The variety of organic molecules that Curiosity recently discovered on the Red Planet included chlorobenzene. This molecule is created when carbon molecules burn with perchlorate, so scientists suspect that it could have been created when the soil samples were burnt, according to New Scientist.

Researchers were inspired by this indirect evidence to dig a little deeper and find more evidence that the Viking landers could have found and then destroyed organics. In a new study, published in June in the Journal of Geophysical Research: Planets, Melissa Guzman of the LATMOS research center in France, McKay and a handful of collaborators revisited the Viking lander data to see if anything was missed.

This team found that the Viking landers also detected chlorobenzene, which the researchers said could have formed from burning organic material in the soil samples.

Still, this is not proof that the Viking landers found organic molecules and then accidentally burned them, the researchers told New Scientist. Even the scientists who completed this investigation are divided.

Guzman said she still isn't completely convinced that the chlorobenzene they detected formed when organics in Martian soil were burned. She said that the molecule could have come from Earth aboard NASA equipment.

But despite this skepticism, others are convinced; "this paper really seals the deal," Daniel Glavin, an astrobiologist at NASA's Goddard Space Flight Center who was not involved in the study, told New Scientist.