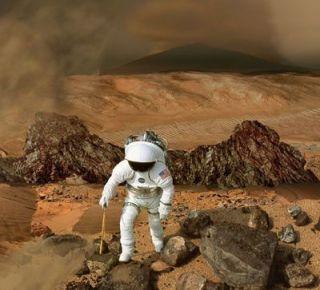 Challenges ahead for human explorers of Mars given the toxic nature of perchlorates that are pervasive on the red planet.
(Image: © NASA/JPL)

The pervading carpet of perchlorate chemicals found on Mars may boost the chances that microbial life exists on the Red Planet — but perchlorates are also perilous to the health of future crews destined to explore that way-off world.

Perchlorates are reactive chemicals first detected in arctic Martian soil by NASA's Phoenix lander that plopped down on Mars over five years ago in May 2008.

It is likely both of NASA's Viking Mars landers in 1976 measured signatures of perchlorates, in the form of chlorinated hydrocarbons. Other U.S. Mars robots — the Sojourner, Spirit and Opportunity — detected elemental chlorine. Moreover, orbital measurements taken by the Mars Odyssey spacecraft show that chlorine is globally distributed.

Finding calcium perchlorate "was one of our most unexpected results," said Peter Smith, the Phoenix principal investigator at the University of Arizona in Tucson.

"Perchlorate is not a common word in the English language; all of us had to go and look it up," Smith said during Spacefest V, a conference held May 24-27 in Tucson, Ariz. "Perchlorate has become an important component of the soil … and half a percent is a fair amount," he said.

Smith said microbes on Earth use perchlorate for an energy source. They actually live off highly oxidized chlorine, and in reducing the chlorine down to chloride, they use the energy in that transaction to power themselves. In fact, when there's too much perchlorate in drinking water, microbes are used to clean it up, he said.

Furthermore, seasonal flow features seen on Mars may be caused by high concentrations of the brines of perchlorate, which has a strong attraction to water and can drastically lower its freezing point, Smith told SPACE.com.

The high levels of perchlorate found on Mars would be toxic to humans, Smith said.

"Anybody who is saying they want to go live on the surface of Mars better think about the interaction of perchlorate with the human body," he warned. "At one-half percent, that's a huge amount. Very small amounts are considered toxic. So you'd better have a plan to deal with the poisons on the surface."

Any humans exploring Mars, Smith said, will find it hard to avoid the finest of dust particles. "It'll get into everything…certainly into your habitat."

Undeniably, Martian dust devils laden with perchlorates are sure to be devilishly dangerous.

But Smith also noted that perchlorate is used within the pyrotechnics industry, and ammonium perchlorate is also a component of solid rocket fuel. "So maybe you can mine it as an on-the-spot resource," he said.

Perchlorate has made, and continues to make, the search for organics on Mars all but impossible, said astrobiologist Chris McKay of NASA's Ames Research Center in Moffett Field, Calif.

"Its presence is good news for the possibility of life on Mars…but very, very bad news for humans, McKay told SPACE.com. "Once again, Mars is full of surprises."

"It's bad for astronauts because it is toxic for humans, as it interferes with the thyroid," he said.

McKay is one of the co-authors of a new research paper delving into perchlorates on Mars; the work was led by Alfonso Davila of the SETI Institute in Mountain View, Calif. That review is slated to appear in the International Journal of Astrobiology and focuses on perchlorate as both a chemical hazard as well as a resource for humans.

The research emphasizes that perchlorate is widespread in Martian soils at concentrations of between 0.5 to 1 percent. There are dual implications of calcium perchlorate on Mars. On one hand, at such concentrations, perchlorate could be an important source of oxygen. But it could also become a critical chemical hazard to astronauts.

In the forthcoming paper, the researchers propose a biochemical approach for the removal of perchlorate from Martian soil that would not only be energetically cheap and environmentally friendly, but could also be used to obtain oxygen both for human consumption and to fuel surface operations. [Search for Life on Mars: A Photo Timeline]

In many ways, managing calcium perchlorate exposure on Mars is viewed as no different than managing for example, uranium, lead or general heavy-metal-contaminated areas in modern mines, where dust suppression, dust extraction and regular blood monitoring are employed. Other ideas suggested by the study team include a wash-down spray that can clean suits and equipment of dust deposits.

More proposals are on the table, too. For instance, Mars suits could be kept on the outside of extravehicular activity rovers or habitation modules. The astronauts would climb into their suits through a bulkhead opening, and then the suits would be sealed from within. Thus, Mars crews avoid coming into contact with outside materials.

This approach was originally proposed as a way for astronauts to avoid back contamination when coming in contact with rock and regolith materials. But it might also help in dealing with perchlorates.

There is growing interest in appraising perchlorate as a long-term exposure risk to humans on Mars before the first human sets foot on the Red Planet.

NASA has identified key strategic knowledge gaps that need to be addressed before humans can be sent to Mars. Two key areas are the potential hazards to humans, and the existence of resources that can support human and robotic operations.

"I'd put it in the category of, this is exactly why we do robotic exploration before sending humans," Doug Archer, a scientist with the Astromaterials Research and Exploration Science Directorate of NASA's Johnson Space Center in Houston, said of the perchlorate research.

Archer said perchlorate's existence on Mars would have posed an even larger problem had it not been discovered.

"But now that we know it's there, I am confident we will be able to design around it," he said. "I have a lot of co-workers here at Johnson Space Center who work in the human exploration side of things, and none of them seem to think perchlorate is a showstopper. So sending robotic explorers as precursors to human exploration is shown to be a very useful strategy."