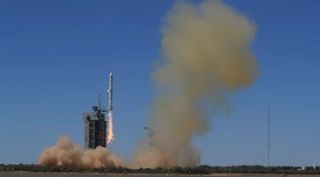 HELSINKI, Finland — China launched twice July 9, with an early Long March 2C launch of two satellites for Pakistan into low Earth orbit being followed up with a Long March 3A mission to back up China's Beidou navigation satellite system.

The optical satellite was put into a 588 by 624 kilometer orbit inclined by 98 degrees by the Long March 2C/SMA configuration which uses an upper stage. [China's Tiangong-2 Space Lab Mission in Pictures]

PRSS-1 was developed by the China Academy of Space Technology (CAST) and is based on a CAST-2000 satellite bus. Its imaging system provides panchromatic and multispectral imaging at 1-meter and 4-meter resolution, respectively, with a swarth width of around 60 kilometers.

It will be used for land and resources surveying, monitoring of natural disasters, agriculture research, urban construction and providing remote-sensing information for the establishment of the China-Pakistan Economic Corridor and in the Belt and Road initiative, according to Chinese state media.

CAST is a subsidiary of the China Aerospace Science and Technology Corporation (CASC), the main contractor for the Chinese space program, which also provided the launch service. CAST also stated it provided training to Pakistan personnel as part of the satellite package, with SUPARCO to operate PRSS-1 after on-orbit delivery.

China has in recent years adopted a strategy of offering turnkey projects which include satellite manufacture and launch as well as possible financing mechanisms. The country has launched communications and other satellites for countries including Belarus, Laos, Venezuela, Bolivia and Nigeria.

Around 1,400 kilometers away in southwest China, final preparations for the launch of a Long March 3A rocket were being made at the Xichang Satellite Launch Centre, among hills in Sichuan province.

The launch vehicle lifted off at 20:58 UTC (4:58 p.m. Eastern) on July 9 carrying a backup second generation Beidou navigation and positioning satellite into a geosynchronous transfer orbit, boosting China's own version of the U.S. Global Positioning System.

CASC declared the launch to be a success just over an hour after takeoff from Xichang, which occurred 17 hours after liftoff of the Long March 2C from Jiuquan. [China Aims to Launch Reusable Space Plane by 2020]

The July 9 launches were China's 19th and 20th of 2018, with CASC aiming to carry out around 36 launches this year. The country's record number of launches in a single year is 22, set in 2016, which included one failure and another partial failure. Commercial launch companies could boost the number to around 40.

The major upcoming government missions for the second half of the year include the return-to-flight of the heavy-lift Long March 5, which failed during its second flight last July and prompted a redesign of first stage engines, and the Chang'e-4 lunar far side soft-landing mission. Both are set for late 2018.