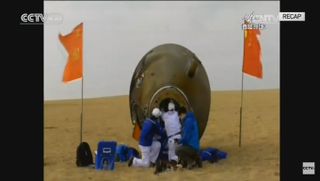 Recovery team members work in and around China's Shenzhou-11 spacecraft on Nov. 18, 2016, just after it landed with taikonauts Jing Haipeng and Chen Dong. China is developing a space plane that can carry crew and aims to launch the vehicle for the first time in 2020, according to media reports.
(Image: © CCTV)

China plans to launch a homegrown, reusable space plane for the first time in 2020, according to Chinese media reports.

"The spacecraft can transport people or payload into the orbit and return to Earth," China's state-run outlet Xinhua reported last week.

Xinhua cited a statement by the state-owned China Aerospace Science and Technology Corporation (CASC), as well as Chen Hongbo, a researcher at the corporation: "Chen said that the spacecraft will be easier to maintain and can improve the frequency of launches at lower cost, bringing new opportunities for more people to travel into space." [Space Planes: Evolution of the Winged Spaceship (Infographic)]

China has already made significant progress in the space plane's development, the nation's space officials have said.

"Currently, China is developing its own reusable earth-to-orbit space vehicles that can take off and land horizontally," Liu Shiquan, vice director of the state-owned China Aerospace Science & Industry Corporation (a different entity than the CASC), said this past June, according to the People's Daily, a newspaper published by the Chinese Communist Party.

The space-plane goal lines up with China's ambitious spaceflight posture. For example, the nation aims to have a space station up and running in Earth orbit by the early 2020s, and it wants to land people on the moon by the mid-2030s.

China's space plane would not be the first winged vehicle to reach orbit, of course. For example, NASA's now-retired space shuttle fleet flew 135 missions between 1981 and 2011, and a similar vehicle built by the Soviet Union, called Buran, made it to orbit once, in 1988. (The Buran program was canceled in 1993.)

And several other space planes are in development as well, most famously Virgin Galactic's suborbital SpaceShipTwo and Sierra Nevada Corp.'s Dream Chaser. SpaceShipTwo will ferry payloads and people to and from suborbital space, whereas Dream Chaser will be an orbital vehicle. Sierra Nevada plans to launch two versions of the vehicle — a robotic cargo craft and a crew-carrying variant.