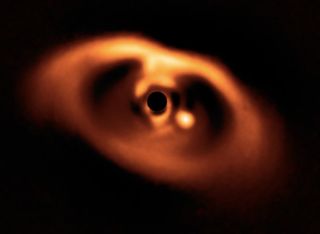 This baby planet (bright spot to the right of the central blacked-out area) has been developing in a cozy nursery of dust and gas for 5.4 million years!
(Image: © A. Müller et al./ESO)

Astronomers just captured a first-of-its-kind image of a newborn alien world — which has been developing in a nursery of dust and gas for more than 5 million years.

So why is this planet considered just a baby? Astronomers say it's because the star, called PDS 70, is only 5 million or 6 million years old. And compared with their normal life spans of several billions of years — our sun is about 4.5 billion years old — that makes the gas giant planet just a babe. As such, this infant has yet to reach its mature size.

The astronomers captured a shot of the now-internet-famous baby using the SPHERE planet-hunting instrument on the European Southern Observatory's Very Large Telescope. ; our sun, for example, is roughly 4.5 billion years old.

With SPHERE (which stands for Spectro-Polarimetric High-contrast Exoplanet Research), the astronomers could see young "features" in the star system of the young planet. Specifically, the researchers saw the disk of gas and dust, which consists of leftovers from when the parent star of PDS 70b was forming. [9 Most Intriguing Earth-Like Planets]

Stars and planets tend to form in clouds of dust and gas, and as the star gets older, the dust and gas dissipate. This likely happens due to a couple of reasons. First, growing planets scoop up much of the remaining dust and gas as they accrete and grow over time. Also, a constant stream of particles emanating from the star (known as the solar wind) likely blows some of the material away. But scientists are eager to study more young-star systems to confirm these hypotheses and learn more about how planets form.

"So far, several thousands of planets around other stars have been discovered, but astronomers still know very little about how they actually form, since most of the observed planets are orbiting around mature — or old — stars," wrote study participants Miriam Keppler and Andre Müller, who are both with the Max Planck Institute for Astronomy in Germany, in an email to Live Science. They each authored a paper on the discovery that will be published in a forthcoming issue of the journal Astronomy & Astrophysics.

Usually, the disk of gas and dust disappears when a star is roughly 10 million years old, they said. As for why this planet's gassy home remains, the researchers said they aren't yet sure. But they added that they hope to study the planet with different telescopes to learn more about its composition, weather and other properties; so far, they can tell it has a cloudy atmosphere.

"To understand better how planets form, and finally also to learn about the early history of our own solar system, we need to detect young planets, such as PDS 70b. This makes our discovery so exciting," the astronomers added.

From the observations, astronomers found that the planet has a temperature of about 1,832 degrees Fahrenheit (1,000 degrees Celsius), which makes the gas giant way too toasty for life at this point. (That said, it's very common for young planets to be that hot, so PDS 70b will likely cool down as it gets older.)

"It will probably still take several millions of years until the planet stops collecting surrounding gas and dust," the astronomers added. "Until then, it will grow just a little bit more in mass. When this process stops, its temperature will decrease and the planet will get cooler. How long exactly these processes will take is part of current research in astronomy."

Life likely isn't part of the planet's future anyway. PDS 70b is a hefty planet, with a mass several times that of Jupiter; we've seen life only on Earth, which is small and rocky. And the planet orbits far away from its parent sun, so PDS 70b won't receive much heat from the star after growing out of its baby stage and cooling down. (The best hope for life around PDS 70b might come from a rocky exomoon that receives energy from the planet PDS 70b, but as astronomers haven't found any of these types of moons yet, it's hard to say for sure.)

PDS 70b orbits at roughly 2 billion miles (3.2 billion kilometers) from its star, or the same distance as Uranus is from our sun. This makes the newfound planet a slow orbiter, taking about 120 Earth years to make a single lap around its star.

The next challenge will be for astronomers to image additional baby planets like this one, to reveal more about what the early days of solar systems look like. Perhaps then, scientists can better understand what makes a solar system friendly to life as we know it on Earth.