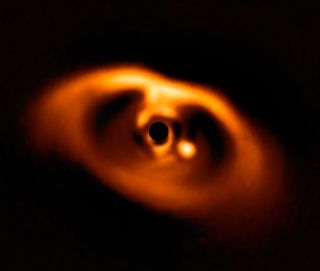 This photo from the SPHERE instrument on the European Southern Observatory's Very Large Telescope is the first clear image of a planet caught in the act of formation, around the dwarf star PDS 70. The planet is clearly visible as a bright point to the right of center, which is blacked out by the coronagraph mask used to block the blinding light of the star.
(Image: © A. Müller et al./ESO)

A stunning, first-of-its-kind photo shows a huge, newfound alien world taking shape in the disk of gas and dust surrounding a young star.

The image is the first confirmed direct observation of such a young exoplanet, discovery team members said.

"These disks around young stars are the birthplaces of planets, but so far only a handful of observations have detected hints of baby planets in them," discovery leader Miriam Keppler, of the Max Planck Institute for Astronomy in Heidelberg, Germany, said in a statement. "The problem is that, until now, most of these planet candidates could just have been features in the disk." [Gallery: The Strangest Alien Planets]

Keppler and her colleagues analyzed new and archival observations of a young dwarf star called PDS 70, which is about 5.4 million years old and lies 370 light-years from Earth. These data were gathered by two instruments on the European Southern Observatory's Very Large Telescope (VLT) in Chile, and one instrument at Hawaii's Gemini Observatory.

The observations revealed the presence of a newborn gas giant in PDS 70's surrounding protoplanetary disk. And the team was able to photograph the alien world, known as PDS 70b, using one of the two VLT instruments, which is called SPHERE (Spectro-Polarimetric High-contrast Exoplanet Research).

SPHERE features a coronagraph, which blocks out the blinding light of a star, allowing dim orbiting planets to be resolved. (The Gemini instrument, the Near-Infrared Coronagraphic Imager, has one as well.)

The researchers' analyses suggest that PDS 70b is two to three times bigger than Jupiter and lies about 1.9 billion miles (3 billion kilometers) from its star — about as far as Uranus is from the sun.

PDS 70b is much hotter than any planet in our solar system, registering a sizzling 1,800 degrees Fahrenheit (1,000 degrees Celsius), the researchers determined. This elevated temperature may seem odd given the planet's significant distance from its star, but it's in line with that of other newborn gas giants, study team members said. (Extremely young planets retain a great deal of heat left from their formation.)

The researchers report the discovery of PDS 70b and its measured and inferred characteristics in a pair of new studies, both of which were published online today (July 2) in the journal Astronomy & Astrophysics. (You can read them here and here.) (The research teams are not identical for both studies, but there is considerable overlap. For example, Keppler is lead author of the discovery paper and second author of the companion study.)

"Keppler's results give us a new window onto the complex and poorly understood early stages of planetary evolution," André Müller, lead author of the second study, said in the same statement.

"We needed to observe a planet in a young star's disk to really understand the processes behind planet formation," added Müller, who's also based at the Max Planck Institute for Astronomy.