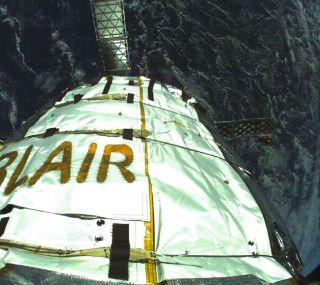 A picture on the end of one of the aft solar arrays looks toward the midsection of Genesis 2 as well as the forward solar panels.
(Image: © Bigelow Aerospace.)

The twopictures confirmed the operation of the inflatable module?s camera systemfollowed by download to the Mission Operations center for the Las Vegas, Nevada-basedspaceflight firm Bigelow Aerospace. The testing will continue as the groundteam perfects the acquisition of the Genesis 2 signal.

A camera onthe interior of Genesis 2 captures a test image of the expansive spacecreated by the inflation technology. In this early stage of checkout, thisimage was taken without all the spacecraft interior lighting turned on.

A picture on the endof one of the aft solar arrays looks toward the midsection of Genesis 2 aswell as the forward solar panels.

An ISCKosmotras Dnepr rocket launchedGenesis 2 into space on June 28. The 15-foot (4.4-meter) module inflatablemodule is designed to expand to a diameter of about eight feet (2.54 meters)and carries 22 onboard cameras to relay scenes from both inside and outside thespacecraft. Personal items from paying customers, a ?Biobox? with scorpions,ants and cockroaches, and a Space Bingo game are tucked inside the spacecraftas cargo.

Genesis 2is also outfitted with two exterior projection systems designed to demonstratethe casting of messages onto the spacecraft's exterior "for ad purposes orjust for fun," according to Robert Bigelow, head of the space company.