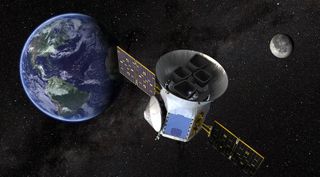 A focus problem with cameras for NASA's TESS mission, discovered last year, appears to be a one-time shift that won't affect the spacecraft's ability to do exoplanet science.
(Image: © NASA)

NASA confirmed last July that the focus in the four cameras on the Transiting Exoplanet Survey Satellite (TESS) would drift once the cameras cool after launch to operating temperatures. At the time, the agency said that it believed that the issue would not be a major issue for the mission, although other astronomers expressed concern it could affect the spacecraft's ability to detect exoplanets.

Additional testing and analysis since then has given those involved with the mission greater confidence that they understand the focus issue and that it won't adversely affect the mission's science. [7 Ways to Discover Alien Planets]

"Subsequent testing that we did starting this summer and then into the fall indicated that there is a model" for explaining the focus change, said George Ricker, principal investigator for TESS at the Massachusetts Institute of Technology, during a briefing about the mission during the 231st Meeting of the American Astronomical Society here Jan. 9. "This is a very reproducible crystallization effect for one of the materials used to manufacture the lenses."

Ricker said the mission did four months of testing on a flight spare camera to understand long-term focus effects. Those tests show that the focus of the camera drifts for about one week, then stops. "There's essentially no measurable change after that," he said, calling the issue a one-time "focus shift" rather than a more continuous "focus drift."

That focus shift, he said, won't affect the ability of TESS to meet its primary, or "Level One," science requirements, which call for eventually measuring the mass of at least 50 planets similar in size to the Earth. The mission's primary focus on photometry — measuring very small changes in brightness of stars as orbiting planets transit, or cross in front, of them — also minimizes the importance of a sharp focus.

"This is a photometry mission, not an imaging mission," he said. "What this means is that it's not important to have a sharp focus across the entire field of view. This was never part of the design. But it is important that the focus be stable, and that's what we've been able to establish."

Ricker said there are no other issues for TESS, currently completing assembly and testing at an Orbital ATK facility in Virginia. The spacecraft is scheduled to ship to the Kennedy Space Center in early February for final launch preparations.

TESS will launch no earlier than March 20 on a SpaceX Falcon 9 into an elliptical orbit that is in a 2:1 resonance with the moon. That orbit, Ricker said, is very stable and also allows for high data rates from the spacecraft. That limits the days on which TESS can launch in order to phase into the proper trajectory. Ricker said there were about 40 days through June on which TESS could launch.

The four cameras on TESS will map nearly the entire sky over its two-year primary mission. Astronomers expect that TESS will detect thousands of exoplanets, many of which will be ideal for follow-up observations by other telescopes, including the James Webb Space Telescope, to characterize them.

TESS has also attracted interest from other astronomers interested in using spacecraft data for other research. Padi Boyd, director of the guest investigator program for TESS at NASA's Goddard Space Flight Center, said at the briefing that there was a very strong response to a first call for proposals to participate on the mission, with scientists proposing to use TESS data for topics ranging from other exoplanet studies to stellar astrophysics and extragalactic astronomy.

"We were very excited to see how the broader scientific community really responded to this opportunity," she said, adding that the initial set of guest investigations will be announced in about a month.

While TESS has a two-year primary mission, Ricker said he believed that the spacecraft could operate for much longer. The stability of its orbit, he said, requires no stationkeeping, and hence minimizes the need to use its thrusters. "The operational life of the mission could very well extend for more than two decades," he said.