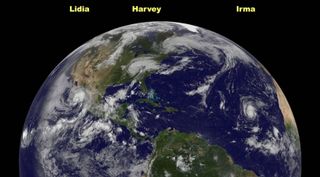 Before NOAA retired the spacecraft on Jan. 8, GOES-13 captured images of many major storms, including this image from Sept. 1, 2017, showing Tropical Storm Lidia and Hurricanes Harvey and Irma.
(Image: © NASA)

AUSTIN, Texas — The National Oceanic and Atmospheric Administratio nannounced plans Jan. 8 to retire its decade-old Geostationary Operational Environmental Satellite (GOES) 13 to make way for its next generation: GOES 16 launched in 2016 and GOES-S scheduled to launch in March.

After a year of on-orbit checkout and validation of onboard instruments, GOES-16 was officially dubbed GOES-East in December when it began to act as NOAA's primary weather satellite staring down on the continental United States and Atlantic Ocean. [GOES-16 Satellite's Most Amazing Photos of Earth from Space]

Once NOAA confirms that satellite's capabilities, which can take as long as a year, it will replace GOES-15 as the agency's primary weather satellite focused on the western United States, Alaska, Hawaii and the Pacific Ocean.