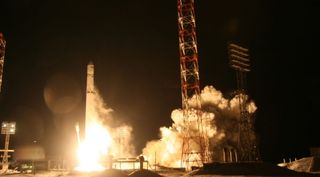 The land-launched Zenit lifted off from the Baikonur Cosmodrome in Kazakhstan at 2:00 p.m. Eastern on a nearly nine-hour mission to deliver the 1,647-kilogram satellite to geostationary transfer orbit. Russian state corporation Roscosmos confirmed spacecraft separation from the rocket’s Fregat upper stage at 10:54 p.m. Eastern.

The Angosat mission is a first for both Angola, the oil-rich African country that gained its first new president in 38 years, Joao Lourenco, this summer, and S7 Group, the Russian aviation company that purchased Sea Launch in 2016 for around $150 million.

Angosat-1 carries 16 transponders in C-band and six in Ku-band, according to the Gabinete de Gestão do Programa Espacial Nacional (GGPEN), the Angolan National Office for Space Affairs. GGPEN said the satellite has a design life of 15 years, and can cover Angola, Africa and some of Europe from its orbital position at 13 degrees East.

Angosat-1 originated with a 2009 memorandum of understanding between three Russian banks and Angola’s finance and telecommunications ministries, but made little progress until 2011 when Russia’s Export Import Bank, Vnesheconombank, VTB Bank AG and Gazprombank agreed to finance the satellite with a 13-year, $278.5 million loan. RSC Energia began construction of Angosat-1 in 2012.

Angosat-1 was previously planned as a 2016 Sea Launch mission, but switched to a land-launched Zenit after Sea Launch halted operations in 2014 with its ocean-faring platforms.

A lack of business, change of ownership, and frayed bilateral relations between Russia and Ukraine stymied Sea Launch’s Angosat mission, which was supposed to be a dual launch with the Energia-100 communications satellite. That mission would have been Sea Launch’s first dual-launch, pairing together two satellites on the same rocket to split the price between customers. Of the world’s leading commercial launch providers, only Arianespace has been able to normalize dual launches, most of which have been on the European Ariane 5 rocket.

S7 Group’s goal is to revive Sea Launch, presumably with the Russian-Ukrainian Zenit rocket, though the company has entertained using a Russian-led alternative if needed. Sea Launch’s last mission was Eutelsat 3B telecommunications satellite in May 2014, about three months after Russia annexed Crimea from Ukraine. Zenit has launched only once since that invasion, orbiting the Electro-L Russian weather satellite in 2015.

Editor's note: This story was updated on Dec. 27 with SpaceNews's launch roundup.