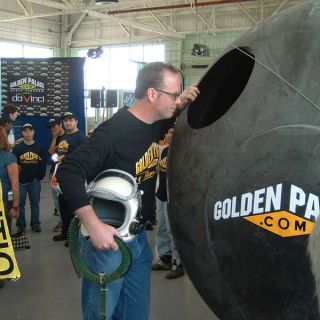 The leader of a Canadian team preparing to launch a piloted rocket into suborbital space is committed to making the spaceflight, even as hopes to win an international private space race appear to be slipping away.

Toronto-based Brian Feeney, leader of the GoldenPalace.com/da Vinci Project, reaffirmed his intent to fly his group's Wild Fire Mark VI spacecraft on a suborbital mission regardless of whether the Ansari X Prize competition is won by competitors this month.

"We're making every effort," Feeney told SPACE.com today. "Until a winner is announced we'll give no ground."

The X Prize is an international competition to use private funding to build and launch a reusable spacecraft capable of carrying three people 62 miles (100 kilometers) up to suborbital space twice in two weeks. The winner gets $10 million.

The lead is firmly in the hands of Mojave Aerospace Ventures, a team led by aviation pioneer Burt Rutan and his firm Scaled Composites. According to still unofficial measurements, the team's SpaceShipOne successfully completed its first X Prize qualifying flight yesterday. A second launch attempt is anticipated as soon as Oct. 4.

"The bird is proving itself to perform," Feeney said of SpaceShipOne.

In comments posted to an X Prize news tracking website today, Feeney told da Vinci project followers that the team does have an internal launch target under discussion, though the official date will be announced only after the da Vinci team arrives at its launch site in Kindersley, Saskatchewan.

The Wild Fire spacecraft would be launched from a balloon from an altitude of about 80,000 feet before firing the rocket into space. Feeney himself will pilot its maiden space shot.

"Our time frame is still October," Feeney said. "We will still fly and do so as soon as safely can be done."

Feeney's online comments were in response to a project follower hoping to glean more specifics about the da Vinci effort and clarify rumors swirling around the team's ambitious Oct. 2 launch date and subsequent flight delay.

"Some people have suggested our throwing our hat in was a Golden Palace media ploy," Feeney wrote in his response. GoldenPalace.com, an online casino, is the title sponsor for the da Vinci Project, whose official name is the GoldenPalace.com Space Program, powered by the da Vinci Project. "This is a serious effort with a lot of people working long days, seven days a week."

"I think their effort is genuine, though the launch date is going to be aggressive," said Gregg Maryniak, executive director of the X Prize Foundation organizing the competition.

Like Feeney, Maryniak is confident the Canadian team will launch a human into suborbital space, prize or no prize if the competition is won before Wild Fire can fly.

"It won't stop them," Maryniak said. "They'll be launching a Canadian into space, it's pretty dramatic."