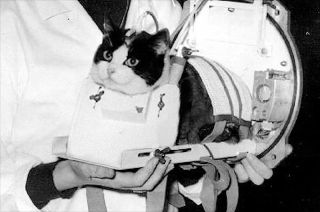 Félicette, the first cat to fly into space in October 1963, is seen her carrier pre-flight. A crowdfunded campaign will erect a memorial to honor the Félicette in her hometown of Paris, France.
(Image: © CNES)

The first cat to launch into space and live to meow about it is getting her own monument — thanks to the crowdfunded support of more than 1,100 of her fans.

A campaign on the website Kickstarter on Friday (Nov. 17) successfully raised more than $57,000 to create "a proper memorial" for Félicette, a female black-and-white stray that lifted off on a French rocket for a sub-orbital spaceflight on Oct. 18, 1963.

The funds will underwrite the sculpture and erection of a statue for Félicette in her home city of Paris. [The History of Animals in Space (Infographic)]

"Although other animals in space — such as Laika the dog and Ham the chimpanzee — are well-known within popular culture and have lasting memorials, very few people are aware that a cat went to space at all. Now it's time for 'The Astrocat' to get the memorial she rightly deserves," wrote Matthew Serge Guy of London, who came up with the idea for the statue and created the Kickstarter campaign.

Chosen by scientists out of a trainee class of 13 other cat-stronaut hopefuls, Félicette was loaded into the nose cone of a French Veronique sounding rocket in Algeria, and sent soaring 97 miles (156 kilometers) above the Earth.

During the mission, which lasted less than 15 minutes from launch to touchdown, Félicette was subjected to forces up to 9.5 times the normal pull of gravity and "became the first and perhaps only cat to experience the weightlessness of space," as described by Colin Burgess and Chris Dubbs in their book, "Animals in Space: From Research Rockets to the Space Shuttle" (Springer, 2007).

Félicette's trip came the same year as the U.S. and former Soviet Union completed their respective first programs to launch astronauts and cosmonauts into Earth orbit. Unlike her fellow 1963 space travelers though, Félicette lifted off with electrodes implanted in her skull to monitor her brain's reaction to the environment and rigors of spaceflight.

It was her implants that may have held back Félicette from achieving fame like her human counterparts.

"The photographs of Félicette with electrodes fitted to her head like a bellboy's skullcap were far from appealing to many [newspaper] readers, especially to those involved in the burgeoning animal rights movement," explained Dubbs and Burgess.

More than 50 years later, it was only because of a chance discovery of a napkin (tea towel) with a design celebrating the first cat in space that Guy became aware of Félicette. Realizing that her role in history had been overlooked — or when noticed, misattributed to a non-existent feline named Félix — Guy set out to give Félicette her due.

"It felt like something big should be done," he wrote.

Guy will use the $57,158 raised to commission Gill Parker, an acclaimed animal sculptor, to create the 5-foot-tall (1.5-meter) bronze statue. The monument's design is still to be finalized, but "it is safe to assume it will include a cat and a rocket," described Guy.

The statue is expected to be ready for installation in seven months, assuming all goes to plan, in time to celebrate the 55th anniversary of Félicette's flight in October 2018.

Depending on their donation, those who gave towards the statue will receive replica "autographed" picture postcards, lapel pins and poster prints commemorating the first cat in space. Those who gave $330 or more will have their name included on a plaque to be placed near the statue. Donors who gave $8,000 (or more) will also receive a 12-inch (30-centimeter) bronze maquette of the monument.

The French attempted to follow-up Félicette's mission with a second feline flight less than a week after the first. Sadly, that nameless cat met its demise when its rocket exploded seven miles (11 kilometers) shy of leaving Earth. After that, based on all public records, space remained cat-less.