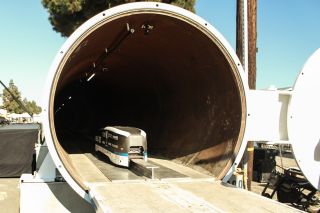 A team of students from Germany sent a carbon-plastic pod whizzing through a tube at 201 mph (324 km/h) last weekend, securing the top spot in Elon Musk's second Hyperloop competition.

Musk, the founder of SpaceX, Tesla and brain-interface company Neuralink, aims to revolutionize transportation with his Hyperloop concept, which he envisions as a series of underground vacuum tubes through which transportation pods levitated by air would zoom at nearly the speed of sound.

In January, SpaceX held its first Hyperloop Competition for students to test prototypes of pods. The winning team, WARR Hyperloop from the Technical University of Munich, again took top prize in the second Hyperloop Pod Competition, which was held between Aug. 25 and 27. The team's pod was one of only three that met the technical criteria for testing inside the 0.8-mile (1.28 km) tube at SpaceX headquarters in Hawthorne, California. [Hyperloop, Jetpacks & More: 9 Futuristic Transit Ideas]

The WARR Hyperloop pod was a complete redesign of the team's first winning structure, the student engineers wrote on their website. Made of carbon-fiber reinforced plastic, the pod weighs only 176 lbs. (80 kilograms) and can accelerate from zero to 217 mph (350 km/h) in just 12 seconds.

The pod is a prototype, as SpaceX's test tube is a mere 6 feet (1.8 meters) in diameter. But Musk envisions tunnels that can accommodate 6,800-lb. (3,100 kg) pods holding up to 28 people each, as he wrote in a white paper introducing the concept in 2014. Musk's vision is that the Hyperloop would provide fast transportation between cities less than about 900 miles (1,500 kilometers) apart. He claims the Hyperloop system could whisk people from San Francisco to Los Angeles, or from Munich to Berlin, in about 30 minutes. That would require speeds of about 760 mph (1,220 km/h).

The WARR team's winning pod is powered by an electric motor and lithium-polymer batteries. Pneumatic brakes provide stopping power and stabilizers dampen vibrations at high speeds. In the SpaceX testing, the brakes decelerated the pod from its peak 201-mph speed in 3 seconds. On Twitter, Musk noted that fast accelerations and decelerations are necessary because of the test tube's short length, but a real system would spread the speed changes over miles, "so no spilt drinks," he said. Musk's plans include making the systems entirely self-powered by installing solar panels above the tunnels.

The SpaceX test track isn't the only one where futuristic transportation pods have been tested. Since Musk published his Hyperloop manifesto, a series of unaffiliated private companies and academic groups have tackled the challenge of turning this futuristic transportation concept into a reality. Hyperloop One unveiled its 1,640-foot-long (500 m) Nevada test track earlier in 2017. The first European test track also opened this year, built by the company Hardt Global Mobility. Another company, Hyperloop Transportation Technologies, made a deal in 2015 to build a 5-mile test track along California's Interstate 5, but there has been little forward progress on permitting and construction since then, according to a January 2017 article on the company by Inverse Innovation.

As the enthusiasm of these companies shows, Musk's Hyperloop concept has some momentum behind it. But the technology is far from bulletproof, physicist James Powell, the co-inventor of superconducting maglev systems, told Live Science in 2015. Safety is a particular issue, Powell said: A slight kink in the tunnels — perhaps caused by one of California's frequent earthquakes — could ruin the system. The air compressor that levitates the traveling capsules and the equipment that maintains low air pressure in the tunnels would both have to be fail-proof, he added, because a loss of air pressure or vacuum would mean an immediate crash.