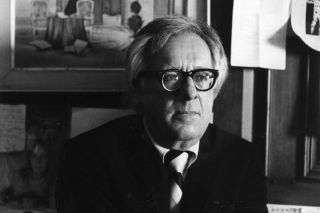 The late author Ray Bradbury, who would have been 97 years old on Aug. 22, 2017, captivated readers with his science fiction — but his 1981 planetarium script left museum officials unmoved.
(Image: © Evening Standard/Getty)

Today (Aug. 22) would have been author Ray Bradbury's 97th birthday. Bradbury, who died in 2012, is acclaimed worldwide for his literary science fiction, but fewer people know about one of his science writing projects that never panned out: a forgotten planetarium-show script for the Smithsonian's National Air and Space Museum (NASM) in Washington, D.C.

Bradbury was working on the NASM project — eventually titled "The Ghosts of Forever: The Great Shout of the Universe!" — in 1980, writer and editor David Romanowski explained in a NASM blog post published online June 2012. Romanowski was a staff writer for Abrams Planetarium at Michigan State University (MSU) in 1980; he found out about the NASM script when he corresponded with Bradbury in the fall of that year about penning a show for the MSU planetarium, Romanowski reported.

Romanowski left MSU several months after he received Bradbury's letter, and the prospect of Bradbury writing for the university planetarium advanced no further. But about 10 years later, after Romanowski joined NASM as a writer-editor in the Exhibits Division, he found something unexpected in the archives: a copy of Bradbury's NASM planetarium script, which had been roundly criticized by museum reviewers in 1981 and was never produced, Romanowski wrote. [5 Great Ray Bradbury Quotes About Death]

As a writer, Bradbury is known and respected for his poetic language, honed over a career that spanned seven decades. But in 1981, Bradbury's flowery prose describing cosmic phenomena failed to impress NASM exhibit developers, whose remarks about the script were incorporated into the files that Romanowski uncovered.

"Many of the phrases are crude and devoid of meaning. Some of it flows nicely, then suddenly it changes and becomes awkward," a reviewer noted.

Other comments proposed that Bradbury's words did not accurately represent the science of the Big Bang and the formation of stars and planets, Romanowski reported. One reviewer scoffed at Bradbury's line about "suns that must birth themselves," saying that his description "reeks with misunderstanding," while another pointed to the phrase "life cooking itself," identifying it as "a poor way of describing/summarizing evolution," according to Romanowski.

In his lifetime, Bradbury published over 500 works, including novels, poetry, plays, and scripts for film and television, according to the author's official website. Though his one attempt at a planetarium production was consigned to the museum archives and never saw the light of day, Bradbury's enthusiasm for space exploration and his skill as a storyteller have captivated readers for more than half a century, and will likely continue to entice sci-fi fans for decades to come.