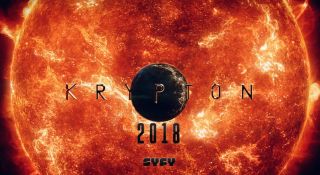 "It's a show that, although it takes place centuries ago on Krypton about the House of El, it's about a conspiracy from the present that has traveled back in time to to Krypton to prevent Superman's legacy from ever happening," Johns said at the show's panel (via The Hollywood Reporter). The 2018 show will start in the present as a group of DC villains jump back in time in an attempt to prevent the creation of Superman. And two heroes go back into the past to stop them: Adam Strange and Hawkwoman.

The 2018 show will start in the present as a group of DC villains jump back in time in an attempt to prevent the creation of Superman. And two heroes go back into the past to stop them: Adam Strange and Hawkwoman.

"Adam Strange and Hawkwoman come to Krypton trying to stop the conspiracy and save Superman's legacy," Johns continued. "Doomsday will be in the show. Brainiac is long overdue to be on screen like that."

Johns stated that "Krypton" will be seperate from the DCEU and other DC TV shows - that's despite original show co-creator David S. Goyer saying several years ago it would be connected to Man of Steel.

The showrunners said they knew that a show set entirely in the past would be unteniable for viewers, and came up with these twists.

"It changes the stakes of the show completely. ... It's not a look backwards. It's quite unique," said co-showrunner Cameron Welsh. "It allows us to deepen and expand upon the known mythology."

Johns then recited Adam's first lines from the show - seemingly from memory: "'I'm from a planet called Earth, my name is Adam Strange, I come from a time long after this and I need you to help me save the legacy of your grandson."

Johns said that in addition to those mentioned, other classic DC characters would appear later in Krypton's run.