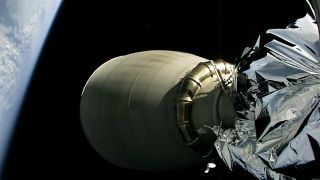 It's official: SpaceX's rockets and spaceships have caught the selfie bug in the final frontier.

When SpaceX launched a Dragon cargo ship to the International Space Station this month, the spacecraft popped up in a "selfie" taken by the upper stage of the Falcon 9 rocket that launched the ship into orbit.

"Dragon photobombs stage 2 before heading to @Space_Station earlier this month," SpaceX representatives wrote in a Twitter post late Monday (June 19). In the photo, the Dragon spacecraft appears as a distant interloper in an otherwise picturesque scene of the Earth and Falcon 9 second stage engine on June 3.

But the photo fun doesn't stop there. The Falcon 9 booster also made its own photobomb in a photo taken from the Dragon spacecraft. [Launch Photos: SpaceX's 1st Reused Dragon Spacecraft]

"Stage 2 returns the favor," SpaceX tweeted with the image, which shows the Falcon 9 second stage backlit by a dazzling blue Earth as seen by a camera on Dragon. One of the space capsule's solar arrays is also visible.

The first stage of SpaceX's Falcon 9 rockets can return to Earth and land, but the second stages currently cannot — at least, not yet. Earlier this year, on March 30, SpaceX CEO Elon Musk hinted that the company was studying ways to make Falcon 9 completely reusable.

SpaceX is pursuing reusable rocket technology to lower the costs of spaceflight. The company has already reused one Falcon 9 rocket booster this year, and has said it hopes to reuse another on Friday (June 23) when SpaceX will launch a Bulgarian communications satellite into orbit from NASA's Kennedy Space Center in Florida.

In fact, even the Dragon used in the June 3 launch was reused. It first flew to the International Space Station in 2014. After launch, the spacecraft rendezvoused with the station to deliver about 6,000 lbs. (2,700 kilograms) of fresh NASA supplies for the orbiting lab's crew.