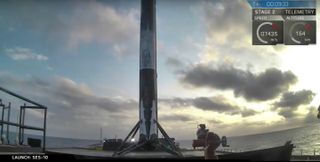 The first stage of a SpaceX Falcon 9 rocket sits on the deck of a robotic "drone ship" shortly after landing on March 30, 2017. The touchdown was the second for the booster, which also touched down after a mission in April 2016.
(Image: © SpaceX)

SpaceX's reusable-rocket ambitions are apparently even grander than we thought.

The company lofted the SES-10 communications satellite to orbit Thursday (March 30) using a Falcon 9 booster whose first stage already had a space mission under its belt — a historic milestone in SpaceX founder and CEO Elon Musk's quest to slash the cost of spaceflight through the use of reusable hardware.

The two-stage Falcon 9's first stage landed successfully, for the second time, about 9 minutes after liftoff Thursday. But that's not the only piece of the rocket that SpaceX recovered.

During a post-launch teleconference with reporters Thursday evening, Musk revealed that the Falcon 9's payload fairing — the protective nose cone that shielded SES-10 during launch — came back for a soft splashdown in the Atlantic Ocean, thanks to onboard thrusters and a steerable parachute.

"That was definitely the cherry on the cake," Musk said.

That cherry is pretty valuable: It cost about $6 million to build the 16.5-foot-wide (5 meters) fairing, Musk said. (For perspective, SpaceX currently sells Falcon 9 launches for $62 million each.)

"That's looking quite promising," he said of the fairing's return-to-Earth technology. "So what we'll have is kind of like a bouncy castle for it to land on, and aim to reuse the fairing as well."

And that may not be all.

"We didn't originally intend for Falcon 9 to have a reusable upper stage, but it might be fun to try like a Hail Mary," Musk said. "What's the worst that could happen — it blows up? It blows up anyway."

But even if that Hail Mary pass doesn't work, the price of a Falcon 9 launch should still come down considerably in the near future, Musk said.

"Assuming the fairing reuse works out, and as we optimize the cost of the reuse of the booster, you're really looking at maybe three-quarters of the rocket costs dropping by an order of magnitude, and maybe more," he said.

SpaceX's reusability vision extends beyond the Falcon 9, all the way out to launch systems the company aims to develop for Mars colonization.

"Rapid and complete reusability of rockets is really the key to opening up space and becoming a spacefaring civilization, a multiplanet species, and having the future be something that's incredibly exciting and inspiring that we'll all look forward to," Musk said.