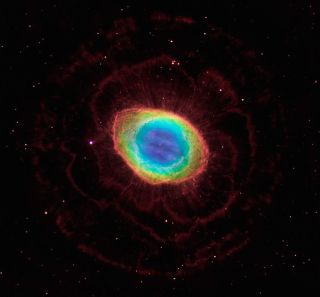 It turns out the iconic Ring Nebula was actually discovered by 18th century comet-hunter Charles Messier, a new study shows.

Until now, history has credited the discovery of this well-known nebula, also known as Messier 57 or NGC 6720, to 18th-century French astronomer Antoine Darquier. However, astronomers Donald Olson, a physics professor at Texas State University, and Giovanni Maria Caglieris of Italy re-evaluated the observation notes taken by Messier and Darquier, revealing a small discrepancy 238 years later.

The researchers found that Messier's observation notes from Jan. 31, 1779, said that he spotted a "small patch of light" near the path of Bode's comet, according to a statement from Texas State. [50 Amazing Deep-Space Nebulas (Photos)]

Although Messier was the first to detect the Ring Nebula, history has credited Darquier as the founder, since Messier's Catalogue states, "Darquier in Toulouse discovered this nebula, while observing the same comet," in the description of M57, according to the statement. This description is what caused the discrepancy over who first discovered the Ring Nebula, researchers said.

"The confusion stems from language creep and lack of context," Texas State representatives said in the statement. "Messier's statement appears to be an endorsement of Darquier being the first person to spot the Ring Nebula. In the 18th century, however, 'discover' more commonly meant to simply discern something, a use that is almost obsolete today."

"Alternatively, Messier could have used 'discover' to qualify Darquier's observations as a later, independent discovery," they added.

Darquier's observation notes, along with a letter sent to Messier in September 1779, confirm that he was not the first to observe and record M57, as he wrote to Messier saying "he did not begin to observe the sky near the path of Bode's comet until the second week of February," according to the statement. Darquier began observing the region between stars β & γ Lyrae only after reading about Messier's comet observations, the statement said.

The Ring Nebula is among Messier's list of 110 deep-sky objects, which at the time was used to provide a list of objects for 18th century comet hunters to avoid. This nebula is located just over 2,000 light-years from Earth in the Lyra constellation and measures 1 light-year (about 6 trillion miles, or 10 trillion kilometers) across.

The researchers were able to determine who exactly discovered the iconic Ring Nebula using historical documents that only recently became widely available online. Their findings were published in the June 2017 issue of Sky & Telescope magazine.