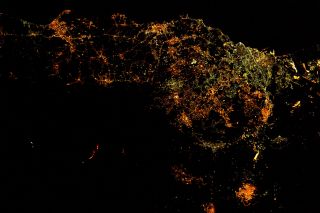 One of the world's most active volcanoes lights up the night in a spectacular new astronaut photo.

Tongues of red-hot lava slide down Sicily's Mount Etna in the image, which was captured from the International Space Station on Saturday (March 19) by European Space Agency (ESA) astronaut Thomas Pesquet.

"The volcano is currently erupting and the molten lava is visible from space, at night! (the red lines on the left)," Pesquet wrote on Twitter Tuesday (March 21), where he posted the image.

"The red-hot lava flowing from Mount Etna can be seen clearly in the image from Sentinel-2A," ESA officials wrote in an image description. "The surrounding snow has been processed in blue to distinguish from the clouds."

With a peak about 10,900 feet (3,320 meters) above sea level, Mount Etna is the tallest active volcano in Europe. It sits near the subduction boundary between the African and Eurasian tectonic plates. Written records of Etna's frequent eruptions go all the way back to 425 B.C.

Pesquet is a member of the space station's current Expedition 50 crew. He arrived at the orbiting lab in November and is scheduled to come back to Earth in early June, along with NASA astronaut Peggy Whitson and cosmonaut Oleg Novitskiy. This is Pesquet's first space mission.