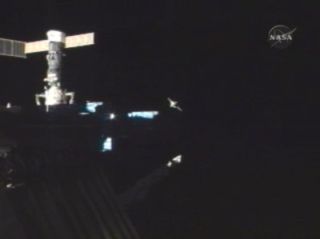 The unmanned Russian cargo ship (right) drifts away from the International space Station after undocking on March 27, 2007.
(Image: © NASA TV.)

"This wasthe longest increment we have had to date," Ginger Kerrick, NASA's leadExpedition 14 flight director, in a mission briefing. "I'm proud of the workthat both the crew and ground teams accomplished."

Russian ISSflight controllers will command Progress 23 to fire its engines and burn up inthe Earth's atmosphere over the Pacific Ocean. On Thursday, the Expedition 14astronauts will take a short trip aboard their Soyuz TMA-9 spacecraft to clearan ISS docking port for the incoming Expedition 15 crew.

Lopez-Alegriaand Tyurin are due to return to Earth on April 20 after handing control of the ISSover to their relief crew, Expedition15 commander Fyodor Yurchikhin and flight engineer Oleg Kotov, who willlaunch towards the orbital laboratory aboard a Russian Soyuz spacecraft alongsideU.S.space tourist Charles Simonyi on April 7. Simonyi is paying more than $20million for a 13-day trip to the ISS under an agreement between Russia'sFederal Space Agency and the Virginia-based firm Space Adventures, and will landwith Lopez-Alegria and Tyurin.

Williams,however, will stay on for at least part of the six-month Expedition 15 mission,and is slated to land with NASA's STS-118 shuttle crew in July. But the delay ofNASA's next immediate shuttle flight, STS-117 aboard Atlantis, will likelydelay the STS-118 mission and subsequently Williams' return to Earth, said KirkShireman, NASA's deputy ISS program manager.

"Certainly,we've had some of the unexpected this year," Shireman told reporters Tuesday. "We'renow in the process of trying to adapt to that change."

Slated tolaunch on March 15, Atlantis' STS-117 ISS construction flight was delayed dueto hail damage to the orbiter's external tank, Shireman said, adding thatliftoff is targeted for sometime between mid-May and mid-June pending an April10 decision on whether to repair the damage or switch to a new tank altogether.

In aworse-case scenario, NASA could return Williams aboard Atlantis during the11-day STS-117 mission by adding her astronaut replacement Clayton Anderson tothe flight's crew, but that is both an unlikely and undesirable option,Shireman said.

"There aretechnical reasons we don't want to do that," Shireman said, adding that weightof Discovery's massive new ISS solar array payload would limit the spaceavailable for fresh ISS crewmember supplies.

In additionto being NASA's longest ISS mission to date, the Expedition 14 flight has beenpacked with a series of spaceflight records since Lopez-Alegria and Tyurinfirst arrived last September.

In November,Tyurin became the first astronaut to whack a golf ball into space from outside theISS, the first of a record-settingfive spacewalks performed during Expedition 14.

Kerricksaid Lopez-Alegria will also set a new record for the longest continuous U.S.spaceflight, snatching the title from NASA astronaut Michael Foale (who has 196uninterrupted days) when he lands on April 20 after 214 days in orbit.

But Williams,now in her 107th day in space, will break that Lopez-Alegria'srecord if NASA's STS-118 mission is delayed to the point that its landingoccurs by mid-July.

"We havebeen constantly been monitoring the astronauts," lead Expedition 14 flightsurgeon Dave Alexander said. "They are healthy and we can't wait to see them."