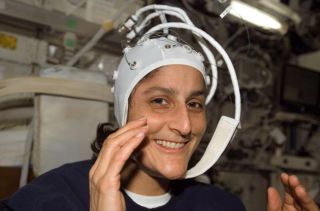 Astronautsliving aboard the InternationalSpace Station (ISS) are filling the time gulf left by anabsent shuttle mission with extra scientificresearch and chores originally slated for their orbital successors.

NASA delayed the launch of its STS-117mission late last month, pushing the ISS construction flight to lateApril at the earliest after a severe storm battered the shuttle Atlantis' external fueltank with golfball-sized hail [image].That delay, and a one-month mission extension to await the Expedition15 crew replacements for Lopez-Alegria (L.A.) and Tyurin (Misha), have maderoom for the additional activities, ISS mission managers said [image].

"We're alittle bit bummed out about the fact that STS-117 is not going to be up herewhen L.A. and Misha are going to be here," Williams told her mother Bonnie Pandyaduring a recent radio interview. "But that will be okay. "

TheExpedition 14 astronauts have spent the bulk of their extra science time on twoexperiments, dubbed ALTEA and TRAC, each aimed at better understanding how thehuman body adapts to long-duration spaceflight.

"When westarted our planning for the increment, we knew...that in the timeframe betweenthe last shuttle flight and the end of the increment, we were going to havevery little time for [science] utilization," Melissa Owens, NASA's ISSExpedition 14 increment manager, told SPACE.com. "And we had kind ofwarned the utilization community [scientists] you know, 'Look, this is a reallyintensive ISS assembly sequence and we're just not going to have enough time.'"

Lopez-Alegria,in fact, was not initially trained to perform the ALTEA experiment -- short forAnomalous Long Term Effects on Astronauts -- which uses a sort of sensor-laden helmetto measure the effects of cosmic radiation on a spaceflyer's central nervous andvisual systems [image].But he has since donned the ALTEA cap and performed several runs to the delightof researchers on Earth, Owens said.

"It'sessentially trying to determine in what part of your brain is detecting lightflashes, which is a common occurrence up here in space," Williams toldreporters last week.

All threeof the Expedition 14 crewmembers have also managed to participate in the Testof Reaction and Adaptation Capabilities (TRAC) experiment, which tests eye-andcoordination to study how the human brain adapts to the spaceflight environment[image].

At leastfive sessions per astronaut, unattainable during the Expedition 14 crew'sprevious schedule, were required to generate usable data, but Lopez-Alegria,Tyurin and Williams are now expected to meet that goal, Owens said.

"To someextent, it's been a silver lining because it's given us time to do some utilization,"Owens said, adding that the Expedition 14 astronauts still have some extra timein the next couple of weeks to perform science or tasks slated for theirExpedition 15 successors. "We're still talking with them to ask, 'Are there anyadditional tasks that we can move forward to help you?'"

"There're abunch of things that we're working on up here as well as construction of thespace station," she added.

Whenthey're not performing extra science work, the Expedition 14 crew hasaccelerated their work schedule and -- at times -- performed a few choresoriginal reserved for their Expedition 15 successors.

One fairlywork-intensive activity originally scheduled for Expedition 15 included routinga data cable through the station's hub-like Unity node, threading it behindmodule panels to form part what will eventually be a station-wide computernetwork 10 times faster than the current version, NASA officials said.

"It's a newnetwork that we're trying to build so that eventually all of the computers onthe station will work on one network," Owens said, adding that when complete,the system will allow Russian ISS systems to be controlled from the outpost'sU.S. Destiny laboratory, a capability unavailable today.

TheExpedition 14 astronauts have also installed a new Unity hatch window and primeda conical ISS connecting segment, known as Pressurized Mating Adapter-3 (PMA-3),for its eventual relocation from its perch on the outpost's Unitynode. The connector is due to be moved prior to NASA's planned STS-120mission this summer, which is expected to install a new hub module, the newly-namedHarmony node, to PMA-3's current berth.

The crew'snext major hurdle will come March 29, when all three Expedition 14 astronauts areexpected to don their Russian-built Sokol spacesuits and move their Soyuz TMA-9spacecraft from its Earth-facing Zarya module docking port to a parking spot atthe aft end the station's Zvezda service module.

The shortflight, an unusual second Soyuz relocation for the ISS crew, will allow theExpedition 15 crew to dock at the Zarya port directly and avoid atightly-packed relocation of their own spacecraft near the planned STS-117mission to the ISS, Owens said.

"It's gonereally well, the crew has been happy, they've consistently commented that we'vestruck a really good balance between keeping their days full and not wearingthem out," Owens said. "They've really been on top of it."