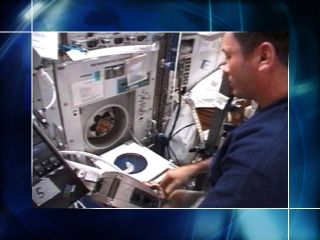 Astronautsaboard the InternationalSpace Station (ISS) are kicking their science program up a notch some 200miles above Earth.

NASAscience officer and ISS commander MichaelLopez-Alegria and his two Expedition14 crewmates are breaking new ground aboard their orbital laboratory as theyput some of the space station's newest tools to work.

"Theongoing process as we've been outfitting the space station and addingfacilities for research has greatly expanded the types of investigations thatwe can do on the ISS," said Julie Robinson, NASA's acting ISS program scientistat the Johnson Space Center.

Toppingthe list of fresh science aboard the ISS is Lopez-Alegria's ongoing effort torecord how his dietin space affects his performance in microgravity, Robinson said. Dubbed theNutrition and Status Investigation, the experiment tracks Lopez-Alegria'shealth in relation to the food and supplementshe ingests during his six-month mission [image].

"It's muchmore than nutrition," Robinson said. "We're looking at oxidative stress,radiation exposure" and other effects.

NASAscientists know that the human body undergoes substantial changes duringlong-duration spaceflights, including a loss of bone and muscle mass, as wellas a steady decline in Vitamin D. Understanding such changes, and developingcountermeasures to keep the human body healthy, are vital for future long-termmissions to the Moon or Mars, researchers said.

While NASAtypically records the physiology of its astronauts before and after flight,Expedition 14 is the first mission to allow spaceflyers to take blood samplesand store them in flight for later analysis on Earth.

The resultwill be "the most comprehensive set of tracking" ever done, Robinsonsaid.

At thecore of Lopez-Alegria's experiments is a new freezer at work in the spacestation's Human Research Facility 2 (HRF-2) rack inside NASA's Destinylaboratory. The Minus Eighty Laboratory Freezer for ISS arrived atthe ISS in July aboard NASA's space shuttle Discovery, but its fourfreezer units are being filled for the first time during Expedition 14.

Lopez-Alegriais also participating in a study to track his orbital sleepand activity patterns to evaluate how his body reacts to life aboard the ISS,where astronauts experience night and day during each 90-minute orbit aroundEarth.

"Previousstudies of shuttle crewmembers have indicated that they have a very poor sleeppattern," Robinson said. "The concern is that these kinds of poor sleeppatterns can lead to poor performance over time."

Whenliving in the unforgiving environment that is the vacuum of space, an alert andfunctional crew is vital for both work performance and safety.

In orderto monitor his own sleep patterns, Lopez-Alegria wears a watch-like device onhis wrist known as an Actiwatch that is one part light sensor, one partactivity monitor.

"Itsilently records both his sleep patterns and light exposure," Robinsonexplained, adding that Lopez-Alegria also keeps a separate log that is thencompared to the Actiwatch data.

Reiter andTyruin, a Russian cosmonaut, too are pursuing their own science experimentsaboard the ISS.

Tyurin'sresearch program includes experiments for both science and commercialorganizations. Among them investigations into protein crystallization, last week'sorbital golf shot, a biomedical study of heartand blood circulation in space and a space-based effort to monitor and predictnatural or man-made disasterson Earth.

"Plantshave a gravity sensing system, a red light sensing system and a blue lightsensing system," explained Robinson. "At the end of the treatment, we take theseeds and freeze them in MELFI for return to Earth so later, scientists canlook at their genes."

Robinsonsaid the Expedition 14 astronauts are not the only ones conducting scienceaboard the ISS. Some 6,585 students from 107 schools and 12 countries have usedan ISS-based camera to study the Earth. They recorded 1,400 images of theirhome planet under the continuous EarthKAM project.

Meanwhile,NASA's STS-116shuttle astronauts are poised to launch towards the ISS on Dec. 7, and willferry tools for seven new science investigations while returning samples fromnine ongoing experiments.

"So it'san extremely busy period and it's a period that's benefiting hundreds of scientists,"Robinson said.