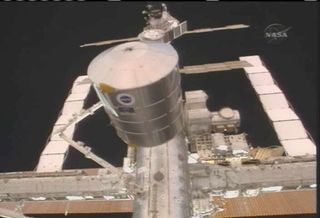 STS-121mission specialists LisaNowak and StephanieWilson deftly berthed the Italian-built Leonardo cargo module into a slotoutside the space station's Unity node at about 7:45 a.m. EDT (1145 GMT), whereit will remain parked throughout Discovery's eight-day stay at the ISS.

"Houston, Discovery, on the big loop, robotics and CBM operator are go for first stagecapture," Nowak said as Leonardo reached its perch outside the Unity node'sCommon Berthing Mechanism, or CBM.

Aside froma couple of errant straps on Leonardo's Unity port, which ISS and shuttleastronauts tracked closely to make sure they didn't hinder the cargo module's arrival,the operation went smoothly.

"We've hadthree sets of eyes through the portal there and we cannot see any signs of theoffending straps," STS-121 mission specialist MichaelFossum said after Leonardo reached its destination.

Known as aMulti-Purpose Logistics Module (MPLM), Leonardo is carrying more than 5,000pounds (2,267 kilograms) of the overall 7,000 pounds (3,175 kilograms)of supplies launched toward the ISS aboard Discovery.

Additional itemsare being moved into the ISS from Discovery's middeck, with several stationcomponents exposed to space in the shuttle's payload bay. Over the next week orso, all nine astronauts aboard the ISS will have their hands full with theintricately choreographed cargo transfer process.

"We can't reallypull everything out of our logistics module and put it in the station becauseit would be so crowded we couldn't move through it," STS-121 commander StevenLindsey told ABC News Radio after Leonardo arrived. "It's kind of a shellgame where you have to make room for something before you pull something else out."

Discovery'sSTS-121 mission is NASA's second shuttle flight since the 2003 Columbia accident. Themission ferried European Space Agency (ESA) astronaut ThomasReiter to the ISS as a third crewmember, will deliver about 3.6 tons ofsupplies, as well as test shuttle inspection and repair techniques.

The STS-121crew dockedat the ISS on July 6 after launchingspaceward from Kennedy Space Center on July 4.

Tuckedamong the thousands of pounds of cargo aboard Leonardo are a couple of vitalitems for space station crews.

The moduleis carrying a new OxygenGeneration System, a U.S.-built piece of equipment that will separate waterinto breathable oxygen and waste hydrogen once installed inside the spacedestination's Destiny laboratory. The 1,465-pound (664-kilogram) U.S. oxygen generator functions much like the Russian-built Elektroncurrently used aboard the ISS. Together, the two systems will help supportlarger, six-person crews once the U.S. generator is brought online.

"It willneed some other software capabilities and some additional hardware before itcan be operational," Debbie Hahn, Discovery's STS-121 payload manager, told SPACE.comof the new oxygen generator before launch.

Alsocritical for space station astronauts is the stationary cycle used for exerciseduring their long, six-month missions. Leonardo carries a new such cycle, knownas a Cycle Ergonometer with Vibration Isolation and Stabilization (CEVIS), soastronauts can maintain muscle strength during the long months ofweightlessness.

Leonardoalso carries a pair of new science tools bound for the U.S.-built Destinylaboratory. A Minus Eighty Laboratory Freezer for ISS (MELFI) will allowstation astronauts to store biological specimens for later transport back toEarth, while the European Modular Cultivation System (EMCS) includes a set offour centrifuges that can be spun up to different speeds to check how plantsgrow under different stresses.

"It basicallyprovides a plant and growth environment in different gravities," Hahn said ofthe EMCS system. "It can be used for other science other than plant biology...theycould be used for later exploration activities."

Shuttle andISS astronauts are expected to begin retrieving the new freezer, oxygengenerator and numerous other supplies locked inside Leonardo after they openits hatchway at 2:23 p.m. EDT (1823 GMT) today, NASA said.