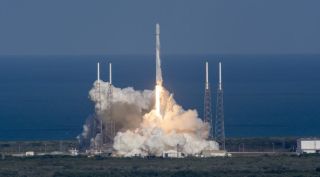 The SpaceX Falcon 9 lifts off May 27, 2016 carrying the Thaicom 8 telecommunications satellite to geostationary-transfer orbit. The rocket's first stage was successfully returned to an offshore drone ship.
(Image: © SpaceX)

"SpaceX is proud to have been selected to support this important National Security Space Mission," Gwynne Shotwell, SpaceX president and COO, said in a statement. "We appreciate the confidence that the U.S. Air Force has placed in our company and we look forward to working together towards the successful launch of another GPS-III mission."

The award is SpaceX's second Air Force launch contract for a GPS 3 satellite but the first for which it faced a competing bid. ULA confirmed last September, when bids were due, that it sent in a proposal.

ULA ultimately decided not to bid on a launch contract the Air Force awarded to SpaceX last April for a 2018 launch of the service's second GPS 3 satellite. ULA said that it couldn't win in a straight price shootout and couldn't be sure it would have a rocket available due to congressional restrictions then in place for the Atlas 5's Russian-made RD-180 engine. That contract went to SpaceX for $82.7 million, about half of what ULA normally charges for an Atlas 5 launch.

In a statement sent to reporters, Lt. Gen. Samuel Greaves, leader of the Air Force's Space and Missile Systems Center, said "the competitive award of the GPS 3 Launch Services contract to SpaceX directly supports SMC's mission of delivering resilient and affordable space capabilities to our nation."

The first GPS 3 satellite is currently scheduled for an early 2018 launch aboard a ULA Delta 4 rocket.