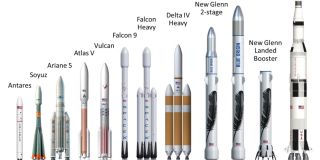 The 300-acre site will be built on land that previously hosted a trio of Atlas rocket launch pads. The latest version of the Atlas now flies from Launch Complex 41.

Some of NASA's most historic missions were launched from Complex 36, including the Pioneer, Surveyor and Mariner spacecraft in the 1960s and 1970s. The pads were operational from 1962 to 2002.

Basically, all that remains of the original launch complexes is a dome-shaped white circle, site of the blockhouse where the launch team was based during countdowns and liftoffs, said Blue Origin's Scott Henderson, director of Orbital Launch Operations.

Blue Origin, which leased the land in 2015, plans to build a launch pad for its reusable New Glenn orbital rockets, an integration and refurbishment facility, and a test stand for the rockets' BE-4 engines.

The BE-4, a liquid oxygen and methane-powered engine, also will be sold to United Launch Alliance, which is developing a next-generation Atlas rocket known as Vulcan. ULA is a partnership of Lockheed Martin and Boeing.

The new launch complex will be Blue Origin's second major construction project at the Cape. In May, the Kent, Washington-based firm broke ground on a 750,000 square-foot plant near NASA's Kennedy Space Center where it will manufacture and assemble the New Glenn rockets. Blue Origin expects to begin flying the boosters around 2020.

"By the end of the year we will be fast and furious into production," Henderson said.

New Glenn is a follow-on program to the company's suborbital New Shepard launch system, a reusable rocket and capsule designed to fly payloads and passengers to about 62 miles above the planet. Test flights with crewmembers aboard are expected to begin this year.