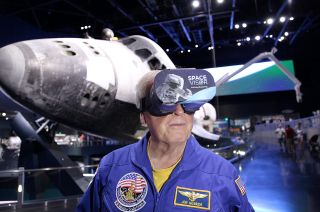 Visitors to NASA's Kennedy Space Center can now take home the retired space shuttle Atlantis, the International Space Station and the entire solar system as a souvenir — all through a new virtual reality (VR) headset and app-driven experience.

Space Visor, available from Kennedy Space Center Visitor Complex gift shops and its online store, is designed to give its wearers the chance to continue their exploration of the complex and its space artifact exhibits after departing from the Florida spaceport.

"At [the] Kennedy Space Center Visitor Complex we create immersive space experiences for our visitors," said Therrin Protze, chief operating officer, in a statement. "The Space Visor is the next step to bring our guests an unparalleled experience at the height of current technology." [Virtual Reality and Mars: 4 Ways Tech Will Change Space Exploration]

Developed by Delaware North, the company that operates the Kennedy Space Center Visitor Complex for NASA, and brandVR, Space Visor uses the owner's smart phone and a trio of custom-designed apps to immerse visitors in a VR world that "brings space artifacts to life."

The Space Visor takes users on a spacewalk outside the International Space Station, where they can explore inside and learn about the orbiting outpost's modules, and to the surface of the moon for an Apollo lunar rover ride. Wearers can also tour parts of the visitor complex where the public cannot go in real life, including exploring inside the Gemini 9 and Apollo 14 space capsules.

Three apps were developed for use with the Space Visor:

All three mobile apps can be downloaded for free from the Apple App Store or Google Play.

The headset, which costs $60, can be used while at the Kennedy Space Center Visitor Complex or elsewhere. The Space Visor is recommended for use with flagship mobile devices produced since 2015, including the Apple iPhone and Samsung Galaxy.