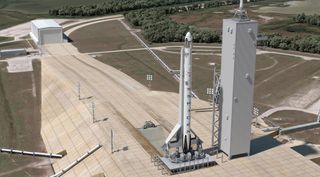 SpaceX's plans for launches of crewed Dragon spacecraft would require the crew to board prior to fueling, which has drawn the criticism of a NASA advisory panel.
(Image: © SpaceX)

WASHINGTON — A NASA safety board recommended in its annual report that the agency closely study the safety issues associated with SpaceX's fueling plans for Falcon 9 commercial crew missions.

The annual report by the Aerospace Safety Advisory Panel (ASAP), released Jan. 11, raised the issue of what it calls the "load and go" approach planned by SpaceX to fuel the Falcon 9 rocket with liquid oxygen and kerosene propellants only after astronauts have boarded the Dragon spacecraft.

Traditionally, launch vehicles are fueled hours before launch, and only afterwards do crews board the spacecraft. However, SpaceX has shifted to an approach of fueling the rocket starting only about a half-hour before launch. That allows the company to use "super-cooled" liquid oxygen, which is denser and provides additional performance. However, it would require crews to board the Dragon prior to the start of fueling. [SpaceX's Crewed Dragon Spaceship in Pictures]

ASAP, in its report, noted that it is not clear how safe this approach is given the limited experience of the "load and go" approach. "In this regard, the Panel is concerned that the dynamic thermal effects on the system associated with loading densified propellants may not be adequately understood, which results in a higher level of uncertainty that must be factored into the risk determination," it stated.

Another NASA advisory group, the International Space Station Advisory Committee, first raised concerns about the "load and go" approach in a December 2015 letter to NASA. The issue received new scrutiny when a Falcon 9 rocket exploded on the pad prior to a static-fire test Sept. 1 in advance of the scheduled launch of the Amos-6 communications satellite.

"There is a unanimous, and strong, feeling by the committee that scheduling the crew to be on board the Dragon spacecraft prior to loading oxidizer into the rocket is contrary to booster safety criteria that has been in place for over 50 years, both in this country and internationally," Stafford wrote in the letter, which NASA released in November.

Stafford raised the issue again at an Oct. 31 meeting of this committee, when he complained that NASA had not responded to his original letter, even after the pad accident. The agency, in a later statement, said it was still evaluating NASA's plans for fueling the Falcon 9 for commercial crew launches, and would incorporate the results of the pad explosion investigation into that analysis.

SpaceX announced Jan. 2 that it had completed the investigation into the explosion. It blamed the accident on buckling of the aluminum liner of a composite overwrapped pressure vessel used to store helium in the rocket's upper stage liquid oxygen tank. Liquid oxygen pooled in the gap between the liner and the carbon overwrap, leading to friction and the subsequent failure of the pressure vessel. The Federal Aviation Administration, which licenses Falcon 9 commercial launches, said Jan. 6 it had accepted the results of that investigation and issued a launch license for SpaceX's next Falcon 9 launch of 10 Iridium satellites, now scheduled for Jan. 14.

ASAP, in its report, said it was concerned that there may be additional, unforeseen issues associated with the "load and go" fueling process. "Despite testing at the component and subassembly level, systems often display 'emergent' behavior once they are used in the actual operational environment," the panel stated in the report. It called for NASA to better understand "how the system functions in the dynamic thermal environment associated with 'load and go' so that other previously unidentified hazards can be discovered."

Some former NASA astronauts remain skeptical of SpaceX's fueling approach. "I am not a supporter of 'load and go'! 'Steep hill' for SpaceX to convince NASA of load and go's safety for crew," tweeted former astronaut Mike Foreman, a veteran of two shuttle missions, in response to the report Jan. 12.

"You are not alone," Clayton Anderson, another former astronaut, tweeted in response.

ASAP cited the "load and go" fueling approach by SpaceX, as well as a fault tolerance issue on the Centaur upper stage that will be used to launch Boeing's CST-100 commercial crew vehicle, as issues for NASA to watch for in the commercial crew program. That is complicated, the panel said, by the fact that the companies control the design of their commercial crew systems, with NASA providing oversight.

"In this type of environment, the [NASA commercial crew program] must work diligently to ensure that acceptable risk is not defined by 'the best we can do given the constraints,'" the panel's report stated. "The residual risk must be openly acknowledged and elevated to the appropriate level within the Agency for consideration."