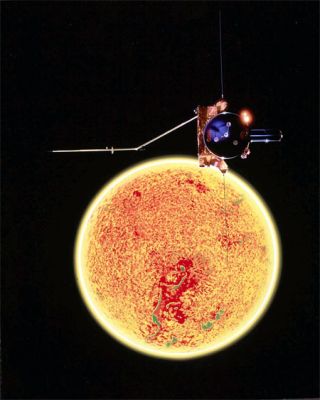 A joint ESA/NASA mission, Ulysses (named after the hero of Greek legend) is charting the unknown reaches of space above and below the poles of the Sun.
(Image: © ESA)

Relatively calm weather was the standard forecast for the Sun, which is near the end of another 11-year solar cycle, but raging solar storms just spotted at its south pole now tell a different story.

At the start of a solar cycle, sunspots-regions on the Sun marked by cooler temperatures and intense magnetic activity-tend to appear near the poles and move towards the equator as the cycle concludes.

Scientists were therefore surprised when Ulysses [image], a joint European Space Agency (ESA) and NASA spacecraft currently embarking on its third tour around the Sun [image] since launch in 1990, spotted intense solar storms near the Sun's south pole.

Solar storms are energetic explosions on the surface of the Sun caused by solar flares or coronal mass ejections, both of which tend to occur near sunspots.

"Particle events of this kind were seen during the second polar passes in 2000 and 2001, at solar maximum," said Richard Marsden, ESA's Ulysses Project Scientist and Mission Manager. "We certainly didn't expect to see them at higher latitudes at solar minimum."

Ulysses also found that the Sun's south pole is currently cooler than its north pole. This is a reversal from 10 years ago, when the northern polar coronal hole was about 7 to 8 percent lower than the southern one. Coronal holes are like bald spots on the Sun: they are regions in the Sun's upper atmosphere, called the corona, where there is less heated gas than average. During solar minimum, coronal holes are mainly found at the Sun's polar regions; during solar maximum, they can be located anywhere.

"This implies that the asymmetry between north and south has switched with the change of the magnetic polarity of the Sun," said George Gloeckler, Principal Investigator for the Solar Wind Ion Composition Spectrometer (SWICS) aboard Ulysses.