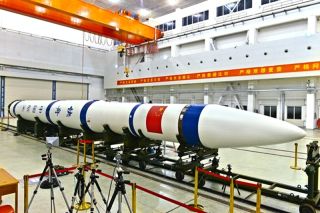 PARIS — A Chinese commercial launch-service provider created earlier this year to bid for small-satellite business worldwide expects to launch 10 of its Kuaizhou solid-fueled rockets per year between 2017 and 2020, the company said Nov. 29.

In a statement published by China Daily, Zhang Di, vice president of the China Aerospace Science and Industry Corp. (CASIC) Fourth Academy, said Expace Technology Co. would charge around $10,000 per kilogram of satellite payload, which he said was less than half the prevailing commercial price. Zhang is also chairman of Expace.

This same company has more than 10 other satellites slated for future launches on Kuaizhou rockets.

Guo Yong, president of the CASIC Fourth Academy, said letters of intent for "nearly 20" Kuaizhou rocket launches were signed at the Airshow China conference and exhibition held Nov. 1-6 in Zhuhai. It was not clear if any of these were with non-Chinese customers.

Zhang said Expace is in discussions with satellite owners in Asia, Europe and Latin America and has already bid on launch contracts in one or more of these regions.

China Great Wall, which markets the Long March series of medium- and heavy-lift rockets, has been obliged to sign bundled satellite-manufacturing and launch contracts with non-Chinese customers to get around a U.S. government ban on launching U.S. satellite parts from China.

For now, most builders of large telecommunications satellites in Asia and Europe, in addition to the United States, incorporate U.S. components and are thus prevented from being exported to China.

But industry officials say this U.S. influence is gradually reducing as non-U.S. manufacturers, stimulated by politically driven goals of autonomy in critical satellite components, reduce their reliance on U.S. suppliers. The strengthening U.S. dollar will accelerate that trend insofar as it makes U.S. hardware more expensive.

The picture is different for small satellites for Earth observation, technology demonstration or other missions. A higher percentage of these satellites built outside the United States are built without reliance on U.S. components and are not bound by the U.S. ban.

Tan Qinghai of CASIC said in the China Daily article that the CASIC Fourth Academy's the latest version of the Kuaizhou rocket, which can place a 1,000-kilogram satellite into a 700-kilometer sun-synchronous orbit — and 1,500 kilograms into a 400-kilometer orbit — is scheduled to make its first flight in 2017.

CASIC and Expace appear to have seen the same market trends that were behind development of Europe's Vega small-satellite launcher, led by Italy, which has conducted seven successful launches and has scheduled an eighth launch for Dec. 5 from Europe's Guiana Space Center spaceport on the northeast coast of South America.