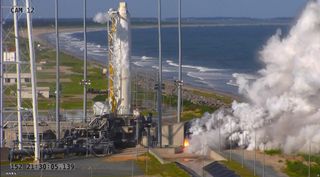 NASA and Orbital ATK have set a new launch date of Oct. 13 for the return to flight of the company's Antares launch vehicle on a mission to the International Space Station, the organizations announced Oct. 4.

The launch of the Antares 230 rocket, carrying a Cygnus cargo spacecraft, is scheduled for 9:13 p.m. Eastern Oct. 13 from the Mid-Atlantic Regional Spaceport at Wallops Island, Virginia. The launch was previously scheduled for a window between Oct. 9 and 13.

Orbital ATK said in a statement that it set the launch date after completing a flight readiness review, but didn't disclose why they were now targeting the end of the original window versus the beginning. One potential factor, regardless of the technical readiness of the launch vehicle and spacecraft, is the weather: forecasts project Hurricane Matthew will travel up the East Coast in the next several days, passing Wallops Island Oct. 8.

The launch, on a mission designated OA-5, will send a Cygnus spacecraft to the International Space Station loaded with about 2,400 kilograms of cargo. Cygnus will arrive at the station, and be berthed by the station's robotic arm, on Oct. 16 assuming a launch on Oct. 13. It will remain at the ISS until Nov. 18.

The launch is also the first flight of the Antares since an October 2014 launch failure. After the accident, Orbital ATK replaced the AJ26 engines used in the vehicle's first stage, and implicated in the failure, with new RD-181 engines from Russian company NPO Energomash. The new engines also provided improve performance for the Antares, increasing its payload capacity.