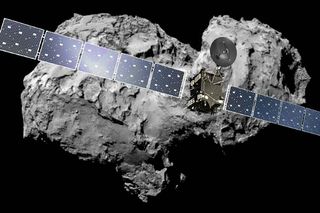 On the morning of Sept. 30, the European Space Agency's Rosetta spacecraft crash-landed on the Comet 67P/Churyumov-Gerasimenko, ending a 12-year mission to study a comet like never before. Launched in 2004, the Rosetta spacecraft visited asteroids before arriving in orbit around Comet 67P in August 2014. In November of that year, Rosetta's lander Philae made a historic landing on Comet 67P — a major space feat.

Parting Shots: The Rosetta Spacecraft's Last Photos of Comet 67P
Rosetta captured its last view of Comet 67P on Sept. 30, 2016 from an altitude of about 65 feet (20 meters).

Death of a Spacecraft: Bittersweet Mood as Rosetta Crash-Lands on Comet
Today (Sept. 30) marks the end of operations for the European Space Agency's (ESA) historic Rosetta mission, and the mood felt almost funereal as the postlanding celebration began.

Goodbye, Rosetta! Spacecraft Crash-Lands on Comet in Epic Mission Finale
The Rosetta probe drifted down to the surface of Comet 67P today (Sept. 30) and ended its 12-year mission.

Rosetta Comet Spacecraft Is About to Plunge to Its Death
At around 6:40 a.m. EDT (1040 GMT) today (Sept. 30), Rosetta is scheduled to crash-land intentionally on Comet 67P/Churyumov-Gerasimenko, ending the European spacecraft's epic 12-year mission.

'Ambition: Epilogue' Pays Tribute to Rosetta's Final Comet Days
The European Space Agency has commissioned a sequel to the short film "Ambition," honoring a historic mission that's about to come to a dramatic end.

Rosetta's Final Day: Scientists Await Comet Probe's Crash
Europe's Rosetta spacecraft will end its mission Friday (Sept. 30) by landing on the comet it's been orbiting for the last two years.

Rosetta and Its Kin: A History of Comet and Asteroid Missions
As Rosetta closes out its dramatic mission with a descent to Comet 67P/Churyumov-Gerasimenko, the European orbiter joins a long list of cometary and small-body missions that have helped us learn more about the early solar system.

How to Watch Europe's Rosetta Comet Mission Finale on Thursday, Friday
Europe's history-making Rosetta comet mission is coming to an end, and you can watch the grand finale live Thursday and Friday (Sept. 29 and Sept. 30).

Rosetta Probe's 'Death Dive' Into Comet 67P Visualized
The European Space Agency's Rosetta probe will meet its demise on September 30, 2016 when a maneuver is performed to make it crash into Comet 67P/Churyumov–Gerasimenko. This visualization shows the descent, but stops short of it crashing.

First Comet-Orbiting Spacecraft Set to Crash-Land Friday
The first spacecraft to orbit a comet will end its historic mission on Friday (Sept. 30) with a crash landing.

Rosetta Probe's 'Death Dive' Into Comet 67P Coming - Mission Highlights
The European Space Agency's Rosetta probe will plummet it into the surface of comet 67P/Churyumov–Gerasimenko on Sept. 30th, 2016, putting an end to the mission. Take a look back at the historic mission through the lens of ESA and Euronews.

Comet Probe Will Be Destroyed - Incredible Records and Discoveries Explained

Rosetta's Comet Is Fluffy Dust to the Core

Main Landing Story: European Spacecraft Lands on Comet in Historic Space Feat
After 10 years and 4 billion miles, humanity's first spacecraft to land on a comet has reached its destination. The European Space Agency's Rosetta mission has landed its Philae probe on the surface of Comet 67P/C-G.

Here's What a Comet 317 Million Miles Away Looks Like to a Landing Spacecraft
This is the view you would have seen if you could have taken a ride on Europe's Philae lander as it descended to the surface of a comet.