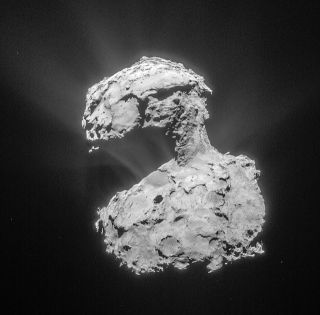 When their comet-chasing probe launched 12 years ago, they were looking for a potato-shaped dirty snowball in outer space. When Rosetta arrived at Comet 67P/Churyumov-Gerasimenko, the scientists found something more like fluffy dustball shaped like a rubber duck.

And when Rosetta's lander Philae got to the surface of Comet 67P, the craft didn't anchor but instead bounced away from its intended landing zone, ending up in the shadow of a cliff. [Photos: Europe's Rosetta Comet Mission in Pictures]

On Friday morning (Sept. 30), project scientists will be looking for some final revelations, as Rosetta ends its mission with a crash landing. The spacecraft will also get its closest-yet look at the surface of the comet, an artifact from the formation of the solar system 4.6 billion years ago.

Rosetta, which launched in March 2004, has been circling Comet 67P/Churyumov-Gerasimenko for the last two years. Around midnight local time (6 p.m. EDT; 2200 GMT) tonight (Sept. 29), the spacecraft will perform its last maneuver to descend to the surface from a distance of about 12 miles (20 kilometers).

It takes about 40 minutes for a signal from the spacecraft to reach Earth, and ESA managers said they expect to receive confirmation of impact here at the European Space Operations Centre (ESOC) around 13:20 local time (7:20 a.m. EDT; 1120 GMT) on Friday. ESA will begin broadcasting coverage of the mission finale at 12:30 p.m. local time (6:30 a.m. EDT; 1030 GMT). You can watch the coverage live on Space.com.

Rosetta's targeted landing pad is a smooth 2,300-foot x 1,640-foot (700x 500meters) ellipse on the "head" of the double-lobed comet, in the so-called Ma'at region. (The mission has used the names of Egyptian deities to describe the comet's diverse geological regions.)

ESA managers chose this spot because it has several active pits. These dust-spewing cometary craters span about 330 feet (100 m) across and 165 feet (50 m)deep, and the walls of these pits appear dotted with intriguing "goose bumps" that could shed light on the primordial makeup of the comet.

Some of the last pieces of data that Rosetta collects, including images, could be released to the public as early as Friday. But even if everything goes as planned for the landing, the fate of the spacecraft itself will remain a mystery; data transmission will end as soon as Rosetta hits the comet, so the project managers won't know if the craft bounced like Philae or sank deep into the comet's dust. [How Harrowing Comet Landing by Philae Nearly Failed (Infographic)]

"Once we know the impact point tomorrow, I'm sure everyone will speculate what the subsequent journey will be," Matt Taylor, Rosetta project scientist, told Space.com. "It could be that Rosetta just sits there and nestles in the dust. We won't know. That will be something to discuss for maybe the next 500 years, until we do comet tours or Elon Musk wants to take us on a bus to the comet to see where it swallowed Rosetta."

Rosetta was the first space mission ever to rendezvous with a comet, escort the object around the sun and drop a lander on the comet's surface. (That November 2014 landing didn't go as planned; Philae ended up in a shadowed spot and therefore couldn't charge its main batteries with solar energy. The lander operated for just 60 hours on the comet's surface, then went into hibernation.)

For the past two years, Rosetta has observed the comet's structure and surface features, and has detected the gases leaving the comet'snucleus. These observations have allowed the Rosetta team to paint an intimate portrait of Comet 67P, and to better understand how the solar system formed from a starless core to a place where life exists.

Scientists don't think life can exist on comets, but Rosetta researchers have found chemicals like organic molecules and amino acids, a discovery that suggests comets played an important role in delivering some of life's ingredients to Earth. Rosetta data also showed that molecular oxygen is in the gas that's streaming off the comet.

"When I saw it the first time, I didn't believe it," Kathrin Altwegg, of the Center forSpace and Habitability at the University of Bern in Switzerland, told reporters at ESOC today, noting that molecular oxygen was long thought to be too reactive to exist in the early solar system. "But we have it, and we have it quite abundantly."

The Rosetta team has learned that this comet's nucleus is a very porous mixture of dust and ice. It's so porous that its consistency could be compared to fresh, powdery snow on Earth, said Valerie Ciarletti, co-investigator of Rosetta's CONSERT instrument, of the Université Paris- Saclay. "It's very fluffy material," Ciarletti told reporters.

And yet Rosetta's observations have also revealed a surprising cometary landscape, with "a rich textural diversity which we have never seen before," said Mohamed El-Maarry, a postdoctoral researcher with Rosetta's OSIRIS team, from the University of Bern in Switzerland. Some regions of the comet even have dunes and ripples that resemble desert features on Earth, Mars and Venus. This is surprising, because the 2.5-mile-wide (4 km) comet has very low gravity, and its geological processes should be quite different, researchers said.

There are still a lot of unanswered questions about comets. For instance, scientists want to know how frequently these cosmic objects collided with each other in the early solar system. If there's evidence that comets had a violent past, then that might be a good sign that they are large in number, which would, in turn, mean that more of them were around to transport water and organics to Earth, said Björn Davidsson, a scientist with the Asteroids, Comets, and Satellites Group at NASA's Jet Propulsion Laboratory in Pasadena, California.

Scientists will be busy analyzing Rosetta's two years of observations from Comet 67P for many years to come. By some estimates, the team has so far analyzed only 5 percent of the Rosetta data.

"We have mixed feelings today, but we have all of this work still to do," Taylor said. "The operations are about to end, but science continues."