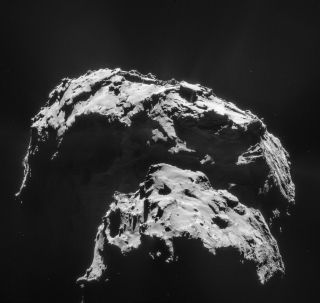 Comet 67P/Churyumov-Gerasimenko is seen here in an image captured by the Rosetta spacecraft. The mission's Philae lander hit the surface with a big bounce, demonstrating that the comet's surface is hard.
(Image: © ESA/Rosetta/NAVCAM)

Comet 67P/Churyumov-Gerasimenko is a small body visited by two spacecraft in 2014: the Rosetta orbiter and the Philae lander. The European Space Agency mission — usually collectively referred to as Rosetta — was the first to do extended observations of the comet.

The mission took place while 67P's orbit took it on its closest approach to the sun. The goal of Rosetta was to investigate the comet's changes as 67P got closer. Generally speaking, solar particles and heat tend to increase activity on comets. They emit more gas and dust and, in some cases, are even visible from Earth as they get more active.

Studies of 67P are intended to teach astronomers more about how the early solar system was formed. Comets are considered leftovers of the time when the solar system was little more than a collection of rocky and icy objects, billions of years ago. Most of those objects were eventually swept up into planetary or moon formation, but there are still plenty left over.

Additionally, astronomers are hoping to better predict how comets change as they get closer to the sun. Comet brightness predictions are notoriously unpredictable. A recent example of that took place with Comet ISON, which was projected to be a prominent comet in late 2013 and early 2014. Instead, the comet broke up shortly after passing the sun in November 2013.

Two Ukrainian astronomers, Klim Churyumov and Svetlana Gerasimenko, first spotted 67P in 1969. They observed it from the Institute of Astrophysics in Alma-Ata (now named Almaty), Kazakhstan, according to the European Space Agency.

The discovery took place by pure chance, ESA added, while the astronomers were hunting down comet 32P/Comas Solà, which was discovered in the 1920s. The comet is considered "periodic," meaning it makes regular runs into the inner solar system. Back then, astronomers would use photographic plates covered in light-sensitive emulsion. The plates were developed after each observing session; one particular one was underdeveloped due to a lack of solution.

"As Svetlana was processing one of these plates on 11 September, she realized she didn't have much solution to develop the plates, but decided to process that one anyway, before preparing a fresh solution. As a result, that plate was underdeveloped," ESA wrote. "Svetlana almost threw the defective plate away, but she didn't. After all, a tiny splotch of light was visible at the center, and they thought it was comet 32P/Comas Solà."

The next month, the astronomers looked at the plates and realized that particular image did not show 32P, as it was about two degrees away. It was instead a new comet, later called 67P/Churyumov-Gerasimenko after its discoverers. The two astronomers were still active in 2015, when Rosetta arrived at the comet.

Comet 67P wasn't the first choice for mission planners. Initially, ESA was aiming for a 2003 launch to target Comet 46P/Wirtanen. A rocket failure, however, forced the mission to be postponed to 2004. Because the orbit of the initial target took it too far away for the mission to work, planners changed the target to 67P in 2003.

Rosetta took off March 2, 2004, riding an Ariane 5 rocket. To pick up speed, it did several slingshot maneuvers (three near Earth and one near Mars) before rocketing farther out in the solar system. The early stages of its mission saw it take long-distance pictures of asteroids and comets and investigate the atmospheres of Venus and Mars.

The spacecraft was put into hibernation in June 2011 and revived in January 2014 for the last few maneuvers to the comet. Rosetta safely arrived in August 2014 and deployed its lander, Philae, in November 2014.

The landing did not go as planned. Philae's harpoons did not deploy to attach it to the surface. The lander drifted for more than two hours, periodically touching the surface, before coming to rest on its side. The lander relies on solar panels to recharge, and in that zone of the comet, there was not enough sunlight to keep it active for long.

Philae did, however, have backup battery power that kept science going for a few days. The lander remained in hibernation until it made brief contact with the orbiter in June and July 2015. The landing team hoped that continued activity would follow the comeback. Unfortunately, after a few patchy messages from the lander, it again fell silent, perhaps due to a change in position. A month before its mission ended, Rosetta captured an image of the lander's grave.

"This wonderful news means that we now have the missing 'ground-truth' information needed to put Philae's three days of science into proper context, now that we know where that ground actually is," said Matt Taylor, ESA's Rosetta project scientist, in a statement.

In September 2016, the Rosetta orbiter ended its mission by deliberately crashing into Comet 67P at a speed of about 2 mph (3.2 km/h). The controlled impact on the in the Ma'at region, the "head" of the rubber-duck shaped comet, allowed ESA scientists to take a closer look at surface features previously studied at a distance, as well as study the region of the comet where the phase transition between ice and gas occurs.

"I can announce the full success of this historic descent," said Patrick Martin, Rosetta mission manager, as he declared mission operations ended. "Farewell Rosetta, you've done the job. That was pure science at its best."

Before Rosetta arrived at Comet 67P, it had already begun to produce scientific results. The comet studied two asteroids in 2008 before it went into hibernation. It first observed the tiny asteroid Steins, which is about 3.1 miles (5 kilometers) across. Two years later, it revealed the complex geology of asteroid Lutetia in 2010.

From the start, Rosetta searched for a potential landing site for Philae. Although the spacecraft was more of a bouncer than a lander, it was still able to gather some scientific information, including the important revelation that the comet contains organic compounds on its surface — the first time that such a find has been made on that kind of an object, said Fabrizio Capaccioni, the principal investigator of the VIRTIS instrument on Rosetta. Organics are sometimes called the building blocks of life, although their presence does not always signal life. (67P's airless environment is hostile to life as we know it.)

The biggest science set to date came from a series of papers published in January 2015.

Astronomers usually call comets "dirty snowballs," but said in this case that it would be better to call 67P a "snowy dustball" because of its dirt-to-ice ratio. This demonstrates that comet composition is more complex than previously thought, said Alessandra Rotundi, the principal investigator of Rosetta's GIADA dust grain analyzer instrument, in an email to Space.com at the time.

The structure of 67P suggests that its formation was relatively gentle, with many small objects falling together at slow speeds. Instead of colliding at high speeds to form a single massive object, they slowly bumped against one another to form a pile of rubble.

The spacecraft also spotted pits on the surface of the comet with small "goose bumps" lining their sides. Simulations suggest that the 3-meter bumps could be the original building blocks of the comet.

As the comet drew closer to the sun, Rosetta observed the significant change in the size of material it tossed away. At its closest approach, chunks thrown from the comet were as large as one meter in size; before that, they averaged one centimeter.

Rosetta is also making scientists consider how water came to Earth. While previous theories postulated that it was comets that were responsible, 67P contains a kind of water that is markedly different than what is found on Earth. This provides stronger evidence for the idea that asteroids may be primarily responsible for our planet's water.

"We know comets contain carbon dioxide, which is one of the most abundant species in cometary atmospheres after water, but it's extremely difficult to observe it in solid form on the surface," said Gianrico Filacchione, who led the study that identified the ice.

During its deathly collision, Rosetta continued to perform science.

"We saw the gas velocity and ram pressure drop to zero before we reached the ground, suggesting there is an interesting acceleration of gas slightly away from the nucleus," Kathrin Altwegg, ROSINA principal investigator, said in a statement.

Rosetta also measured temperatures varying from 80 to 160 degrees Kelvin (minus 316 to minus 172 degrees Fahrenheit or minus 193 to minus 114 degrees Celsius), potentially due to shadowing. And the spacecraft studied the solar wind changes during the collision.

Although the mission is completed, the science continues.

"We have 80,000 images to look at," Mohamed El-Maarry, a postdoctoral researcher with Rosetta's OSIRIS team, from the University of Bern in Switzerland, told reporters at the end of the mission. "It's going to keep us busy for years to come."