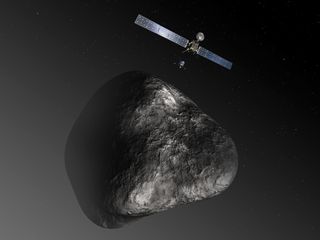 An artist's impression of the Rosetta orbiter deploying the Philae lander to comet 67P/Churyumov–Gerasimenko in 2014.
(Image: © ESA–C. Carreau/ATG medialab)

The Rosetta spacecraft followed a 10-year mission to catch a comet and land a probe on it. Launched in 2004, the spacecraft arrived at its target, Comet 67P/Churyumov-Gerasimenko, on Aug. 6, 2014. After a setback in which a lander did not deploy correctly, the orbiter continued to study its comet for almost two years before plunging into the comet's surface.

The mission included the Philae lander, which made the first touchdown on the comet. Unfortunately, it did not stay down. Scientists at the European Space Agency said Philae unexpectedly bounced twice before landing on the comet when the probe's anchor-like harpoon system failed to fire. Philae ended up in shadow near a cliff face on the head of the 2.5-mile-wide (4 kilometers) comet, which scientists say is shaped like giant rubber duck. The probe fell silent on Nov. 14 as its solar batteries ran out of power. When the comet drew near the sun in July 2015, Philae briefly woke up, connecting to the orbiter a handful of time before falling silent forever.

On September 30, 2016, Rosetta made a planned final plunge into its comet, ending its mission. The controlled dive came as the comet headed toward the outer solar system, where the spacecraft would not be able to continue to operate under solar power.

Rosetta was the first spacecraft to accompany a comet as it entered the inner solar system, as well as the first to attempt landing on a comet. After meeting up with the icy satellite, the spacecraft began a two-year study of the comet's nucleus and environment, observing how a frozen comet changes as it approaches the heat of the sun.

Rosetta was named for the Rosetta Stone, a block of black basalt that was inscribed with a royal decree in three languages — Egyptian hieroglyphics, Egyptian Demotic and Greek. The spacecraft's robotic lander, Philae, was named after a similarly inscribed obelisk found on an island in the Nile River. Both the stone and the obelisk were key to deciphering ancient Egyptian hieroglyphs. Scientists hoped the mission would provide a key to many questions about the origins of the solar system and, perhaps, life on Earth.

Rosetta's payload included 11 instruments that provided information about how the comet develops its coma and tails, and how its chemicals interact with one another and with radiation and the solar wind. Other instruments analyzed the comet's composition and atmosphere.

The planned landing site, called Agilkia after an island in the Nile River in Egypt, is located on the "head" of the comet, the smaller of the two lobes that make up Comet 67P/C-G. Mission controllers at the European Space Agency also chose a secondary landing site for Philae. Site J is a sunny area, but it is also rocky, which made it a dangerous place to land.

When Philae touched down on November 12, 2014, its anchoring harpoons failed to fire as planned. The lander bounced twice before settling permanently on the icy surface. Despite the mishap, the lander survived and began transmitting data back to the orbiter. Unfortunately, Philae's final resting place received very little sunlight, and after only three days, the lander entered hibernation.

Before hibernation, Philae managed to sniff out the first organic molecules found in the comet's atmosphere, as well as collecting images and radio data. The Rosetta team remained optimistic that contact with the lander would be re-established, and continued to search for signs that Philae had awakened.

In July 2015, their hopes were answered. As the comet traveled closer to the sun, the lander briefly recharged, contacting the orbiter a handful of times over several weeks before shutting down for good.

"We never gave up on Philae and remained optimistic," German Aerospace Center engineer Koen Guerts, a member of the lander control team, said in a statement.

Throughout the Rosetta mission, scientists searched for Philae's final resting place, spotting it with less than a month remaining in the mission. The wild bounces left it tucked in a crevice on the comet's rough surface.

"This wonderful news means that we now have the missing 'ground-truth' information needed to put Philae's three days of science into proper context, now that we know where that ground actually is," Rosetta project scientist Matt Taylor said in a statement.

Rosetta was set to launch in 2003 to rendezvous with Comet 46P/Wirtanen. However, due to rocket failure, the mission was postponed, and the target was changed to Comet 67P/Churyumov-Gerasimenko. [Best Close Encounters of the Comet Kind]

Rosetta launched on March 2, 2004, aboard an Ariane 5 rocket. It made four slingshot flybys to boost its speed — one around Mars and three around Earth. On its journey, it passed and photographed asteroids, studied other comets and provided information about the atmospheres of Venus and Mars.

Scientists at the European Space Agency put Rosetta into hibernation mode in June 2011 for its 373-million-mile (600 million kilometers) journey. After awakening in January 2014, the spacecraft still had four more months to travel until it reached its target just inside Jupiter's orbit.

Comet 67P/Churyumov-Gerasimenko was first observed in 1969 by Klim Churyumov and Svetlana Gerasimenko, astronomers from Kiev, Ukraine, who were working at the Alma-Ata Astrophysical Institute in the area that is now Kazakhstan. Churyumov was studying photographs of Comet 32P/Comas Solá, taken by Gerasimenko, when he thought he saw another cometlike object. After returning to Kiev, he examined the photograph more closely and determined that it was a new comet.

The comet — whose name is sometimes shortened to Comet 67P and sometimes to Comet C-G — makes regular visits to the inner solar system, as it orbits the sun every 6.5 years between the orbits of Earth and Jupiter. It is among several short-period comets that have orbital periods of less than 20 years and a low orbital inclination. Because Jupiter's gravity controls their orbits, they are called Jupiter Family comets.

These comets are thought to originate in the Kuiper Belt, a region of space beyond Neptune's orbit filled with icy bodies. As these bodies collide, some are knocked out of the Kuiper Belt and fall toward the sun. Jupiter, with its massive gravitational pull, grabs some of them and changes their orbit.

Rosetta and Philae accompanied Comet 67P to its perihelion in August 2015 and traveled with the comet around the sun and back into deep space. As the comet moved farther away from the sun, the spacecraft was no longer able to receive the solar power needed to run its instruments. On September 30, 2016, Rosetta made a controlled dive into the comet.

"Before Rosetta, comets had only been observed in proximity for up to a few hours," Paolo Ferri, head of mission operations at the European Space Operations Centre (ESOC), told Space.com. "[The mission] will bring a revolution in cometary science. There's been already some spectacular results published, but I think these results have for the moment mostly put into question our existing theories. The most important part will be when the data are processed and new theories are developed. This will take years."