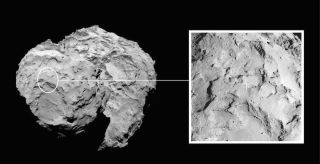 The Philae comet lander on the European Rosetta spacecraft will land on Target J on the Comet 67P/Churyumov-Gerasimenko on Nov. 12, 2014. The European Space Agency unveiled the landing site on Sept. 15.
(Image: © ESA/Rosetta/MPS for OSIRIS Team MPS/UPD/LAM/IAA/SSO/INTA/UPM/DASP/IDA)

A European spacecraft flying alongside a comet in deep space finally has a place to land after a 10-year journey through the solar system.

The European Space Agency on Monday (Sept. 15) unveiled the target landing site on Comet 67P/Churyumov–Gerasimenko for the Philae lander riding aboard the agency's Rosetta mission. Mission controllers picked a drop zone called "Site J"  as the primary target from five potential landing sites shortlisted in late August. If all goes well, the lander will touch down on the comet on Nov. 11.

"There are flat areas, but there is also rough terrain," Stephan Ulamec, Philae Lander Manager at the DLR German Aerospace Center, said of Site J during a news conference today (Sept. 15). "There are some cliffs, there are some boulders. … It's not a perfectly flat area as we probably would have hoped for a safe landing site." [Incredible Comet Photos by Rosetta and Philae]

Philae has been safely flying with Rosetta since their launch. The two spacecraft are currently flying about 18.6 miles (30 kilometers) from Comet 67P/C-G, but in November, Rosetta is expected to deploy Philae on an historic trip to study the comet while attached to its surface at Site J.

Site J won't be called that forever. The European Space Agency will host a public competition to name the landing site. A backup landing site, called "Site C," has also been selected in case some unexpected issue arises with Site J.

The primary landing zone is a sunny region located on the comet's "head" — the smaller of the two lobes of the 2.5-mile-long (4 kilometer) comet. The region is in close proximity to an area that could become active as the comet starts flying closer to the sun, which could give scientists an unprecedented look at the way a comet works.

"We will make the first ever in situ analysis of a comet at this site, giving us an unparalleled insight into the composition, structure and evolution of a comet," Jean-Pierre Bibring, a lead lander scientist for the mission, said in a statement. "Site J in particular offers us the chance to analyse pristine material, characterise the properties of the nucleus, and study the processes that drive its activity."

While mission controllers think that Site J is the best area for Philae to land, it doesn't mean the landing will be a cakewalk. The historic landing will be the first time a space agency has attempted to soft-land a probe on a comet. (NASA's Deep Impact spacecraft was purposefully crashed into a different comet by ground controllers in 2005.)

"As we have seen from recent close-up images, the comet is a beautiful but dramatic world – it is scientifically exciting, but its shape makes it operationally challenging," Ulamec said in a statement. "None of the candidate landing sites met all of the operational criteria at the 100 percent level, but Site J is clearly the best solution."

Mission controllers are going to spend the next few weeks learning more about how to fly with the comet and how to safely move closer to the icy body before the landing. Scientists have also chosen landing site "C" as a backup landing site on the "body" of the comet in case future information gathered by Rosetta shows that Site J would be too dangerous of a landing site.

The $1.7 billion (1.3 billion euros) Rosetta mission arrived at Comet 67P/C-G in early August, and since then, scientists have been using the spacecraft's instruments to scope out the terrain of the comet in the hopes of finding a good site to set down Philae. If all goes according to plan, Philae should be released to the comet's surface on Nov. 11.

Philae will harpoon itself to the comet once it reaches the chosen landing site. The lander will study the comet from the surface while Rosetta takes measurements from orbit. Rosetta is expected to travel with the comet through space until at least August 2015, when Comet 67P/C-G makes its closest approach with the sun in its 6.5-year orbit.

ESA launched the Rosetta spacecraft and Philae into space in 2004. The probes traveled for 10 years, crossing 4 billion miles (6 billion km) of deep space before finally reaching their comet target.